Zimbabwean President Robert Mugabe has promised to crash the protesters who are calling for his resignation.

This threat comes a week after Zimbabwean former liberation rebels, who have been Mugabe’s strongest supporters, demanded his resignation, saying they are withdrawing their support from him, according to the Africa Review.

The war veterans also accused the 92-year-old president of dictatorship and promised to support his vice-president, Emerson Mnangagwa, in the coming general elections.

“I am warning Pastor [Evan] Mawarire. Keep to your religious side. Once you interfere with politics, you are courting trouble,” President Mugabe said Wednesday.

He further accused the French, British, and American embassies in Zimbabwe of funding the ongoing protests, saying they are interfering with his administration.

“I also want to warn ambassadors. Although you are doing it clandestinely, we know. Stop interfering in our politics,” President Mugabe warned.

Since the last general elections in 2013, Zimbabwe’s ruling party ZANU-PF has been experiencing intensified levels of unrest, with many dissenting voices coming from Mugabe’s stout supporters.

Most of these convulsions are seen as succession politics as party members try to strong-arm one another in the race to succeeding President Mugabe when he retires.

Mugabe’s plan to run for another term in the coming elections is also partly to blame for the ongoing unrest as opposition leaders and their supporters fear that his presence in the polls might cause a repeat of the all-too-familiar political violence in the South African country. 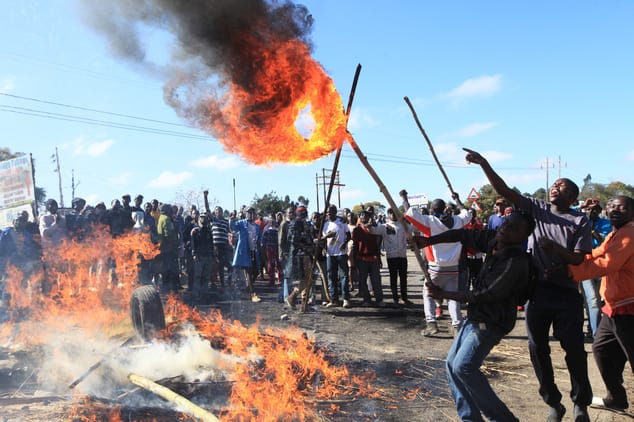 The current cash shortfall and rising cost of living have angered a majority of Zimbabweans, particularly after the government announced its plan to delay salaries for its civil servants.

A Country on Edge

“There is a very [real] risk of civil commotion taking place in the country soon because millions of Zimbabweans have no access to food and even the ZANU-PF regime is struggling to timeously pay civil servants their salaries,” Gutu said.

Two weeks ago, Zimbabwean evangelist Mawarire called on all Zimbabweans to stay away from work in protest over delayed salaries, spurred by the current economic crisis in the country.

Mawarire was arrested and later released after a magistrate dismissed the case against him. Amnesty International says more than 300 Zimbabweans have been arrested for participating in the strike.