Texas, New Mexico, Arizona, Utah, Oklahoma and Colorado, you will now be grouped into one state called “Plymouth.” Washington, Montana, California, Idaho, Nevada, and Oregon we’ll call “Lenten.” Ohio and Indiana have the privilege of getting the unique name “Territory” and all other states will be grouped together as one state and given the name “Land.” Despite your cultural differences, geographical contrasts, pre-existing internal governments and past affairs with one another, you are now to be one state with similar ideas and complimentary schools of thought. Now go, have fun.

If this were to happen, assuming an absence of a federal government to handle and solve state dilemmas, think of the confusion and unrest that would come upon all parties involved. Texas natives would be quarreling with those in Oklahoma. Californians would be bickering with Nevadans. There would be arguments regarding what the state bird should be, what the flag should look like, debates about the appeal for the state seal, and what step should be taken next.

Existing governments would argue with one another about who the new mayor should be and how the elections should come about. New laws would have to be formed – but at who’s discernment? The idea of unity would be artificial and forced. Confusion would be the only unifying element that the citizens of every state could relate to. It would be chaotic, unreasonable, and disorganized. It’d be unrealistic to assume that these states, which are already in existence, would be able to suddenly form a new body without there being issues and conflict along the way.

So why is this similar notion of forced unity thought of as reasonable for the pre-existing communities that were in Africa before they were given borders, names, and a government infrastructure that the land’s people were unfamiliar with? How then were the different ethnic groups expected to so easily divide amongst themselves and simply form a nation with those whom they could not relate? Why are people so in awe at the unrest still found in Africa when the nations are the result of broken up boundaries and fragmented communities? 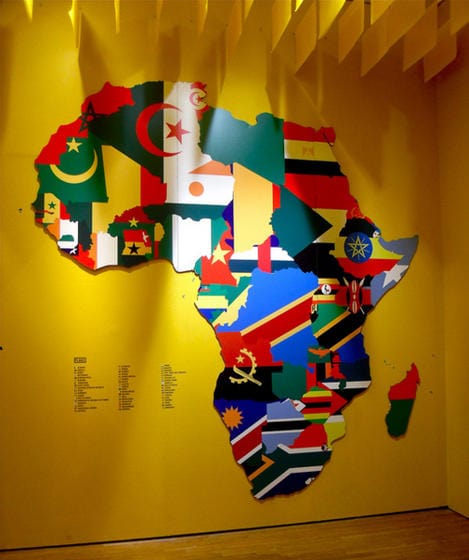 At least America got the chance to develop it’s own nation, culture and traditions. Each state was birthed and got the opportunity to generate a unique spirit. Each state has history and a story. Each state is it’s own.

African countries were stripped of such opportunities. The scale is a bit unproportional, comparing American states to African countries. Such a scale even makes the idea of forced unity appear that much more absurd. Imagine entire countries having to force themselves to unite. African countries were not given such opportunity to create for themselves their own name, develop their own boundaries, and gradually come into their own governments. These national characteristics were given to them. How unnatural is it to assume that by placing people in the same national boundaries and by giving them a name like “Nigeria” or “Sudan,” Zimbabwe,” or “Ghana” that the people would automatically talk to one another and make for an effective nation? And people are surprised that there is unrest in Africa, why shouldn’t there be?

Many people view Africa and ask themselves “Why can’t these people just get along?” Little do they know that much of the unrest in the nations of Africa are long term effects due to the random grouping that colonialism placed upon these lands. European society did not function in the same manner as Africa but when imperialism came about, African communities were forced to emulate the structure of those European countries. European education, language and occupations were placed above the already existing way of life that Africans had already become accustomed to. A new way of living was forced upon our people, demanding that they die to their old ways and rebirth themselves into a new unfamiliar system.

Much of the modern conflict that we find in Africa can be rooted back to imperialism because of an unrealistic belief that communities would just dissolve and create a new working nation. Instead of being disheartened by the conflict in African countries there is much to be impressed about. It’s fascinating to think of the unity that exists when considering how African nations have been able to unite within themselves to breathe life into their land.

Africans have been able overcome the stubborn differences amongst themselves and take pride in the nation they have claimed ownership of. Of course the effects of colonialism’s coercion, forcing pre-existing communities to form one nation, still exist. But maybe the next time someone looks to question the conflict in Africa, they can look back and question what the leaders in colonial times were thinking when they completely disregarded pre-existing communities and expected a nation of strangers to magically function effectively with one another.

Beulah Osueke is a psychology major at Ouachita Baptist University. She believes the world's general view of Africa has been tainted and looks to address the inaccurate perceptions thriving in the media that result from an unjust past and unwarranted generalizations. She hopes to shine light on the efforts being made to generate a new respectable view of Africa, one that attest to Africa's rich culture, pure strength, and tenacious perseverance.