On Friday, Rwandans lined up at different polling stations across the country to elect their leaders. Like in previous elections, stakes were high in Friday’s poll considering that the country is still grappling with the aftermath of the deadly genocide in 1994, which left at least 800,000 people dead.

Among the top contenders in this year’s election was the incumbent President Paul Kagame, who won a third term in office by a landslide. The controversial, soft-spoken 59-year-old President has been in power since 2000 and portrays himself as the person who brought back cohesion and stability in Rwanda.

But who exactly is President Paul Kagame?

Born in Tambwe, Rwanda in October 1957, Kagame is an offspring of the last ruling King of Rwanda, King Kigeli V Ndahindurwa, who ruled the Rwandan Monarchy from 1959 to 1961. Kagame’s mother Austeria Rutagambwa was a younger sister to one of King Ndahindurwa’s wives.

In 1959, Kagame and his family, which belonged to the Tutsi ethnic group, were forced into exile in neighboring Uganda following the end of Tutsi political supremacy in Rwanda. He spent his youth in Uganda, where he fought in President Yoweri Museveni’s rebel army in 1980s. After Museveni’s victory, Kagame became a senior Ugandan military officer, a position that helped him to sharpen his military prowess.

At the age of 43, he joined the Rwandan Patriotic Front (RPF) and went on to become its commander following the death of its leader Fred Rwigyema. As a top commander, Kagame was instrumental in the group’s invasion of Rwanda in 1990. By the year 1993, the rebel forces had taken control of a significant territory in Rwanda, forcing the government of President Juvenal Habyarimana to negotiate a ceasefire.

Although Kagame is often accused of being directly responsible for President Habyarimana’s assassination, which led to 1994 genocide, he is credited for ending the bloodbath through a military conquest.  After the genocide, Kagame served as Rwanda’s vice-president until April 2000 when he was elected President. 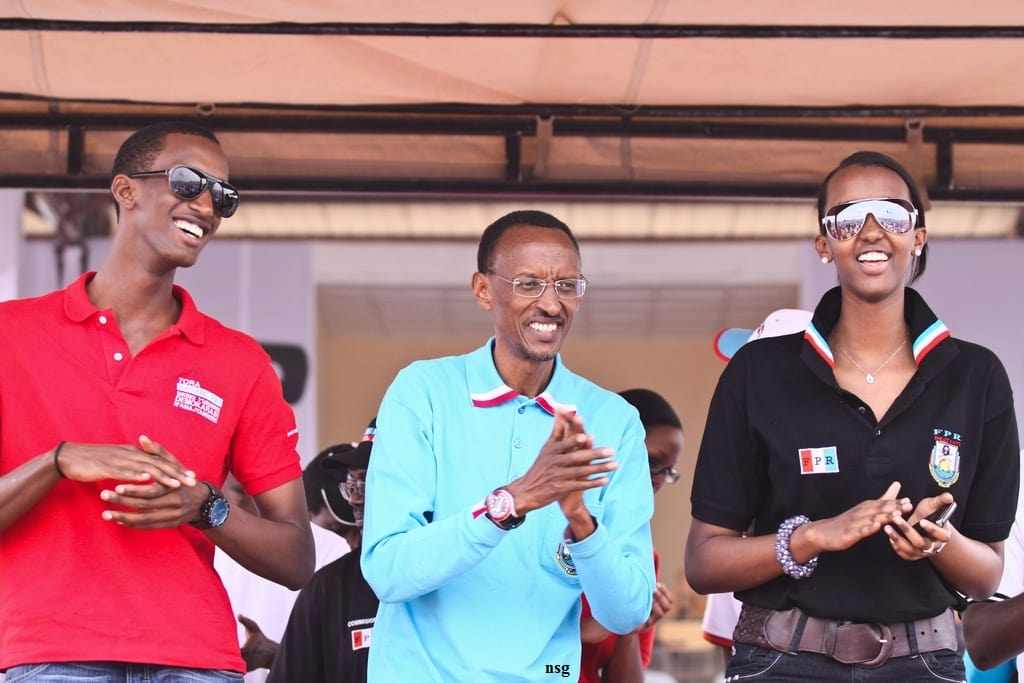 President Kagame with his children Ivan Kagame and Ange Kagame

Kagame’s 17-year-reign has been marred by controversy, with claims of despotism, media and opposition suppression and political assassinations. He stands accused of ordering revenge killings by RPF soldiers in the aftermath of the genocide. But the lanky leader has often refuted these claims, insisting that he did not support the killings.

As President, Kagame has managed to reconcile the country and put negative ethnicity in check. He has also prioritized national development, using Singapore and South Korea as models. Since 2013, the small East African nation has been recording tremendous growth in key sectors like health, education, and agriculture.

Although some critics have disputed his reelection on Saturday saying the election was marred by massive irregularities, Kagame enjoys immense support in Rwanda. Some people, especially those who experienced the 1994 genocide, see him as a symbol of unity.

Kagame is married to Jeannette Nyiramongi and together they have four children, three sons and one daughter.

From the deep tropical forests of Uganda to the State House of Rwanda, President Paul Kagame is indeed a true representation of the struggles that most African leaders have to go through to reach their political climax.