A Federal High Court sitting in Lagos, Nigeria, has ordered the permanent forfeiture of a $37.5 million property on Banana Island, Lagos, which belonged to Diezani Alison-Madueke, Nigeria’s former Minister of Petroleum Resources.

Delivering judgement Monday, Justice Chuka Obiozor said that the sum of $2,740,197.96 and N84,537,840.70 obtained as rent payments for the property must also be forfeited to the Nigerian government.

According to Sahara Reporters, Nigeria’s anti-graft agency, the Economic and Financial Crimes Commission (EFCC), told the court in its petition that Mrs. Diezani had acquired the property from the proceeds of fraud.

The EFCC said its investigations revealed that Diezani purchased the property through a proxy sometime in 2013 while still serving as Nigeria’s Petroleum Minister in President Goodluck Jonathan’s government.

According to the EFCC, in her attempt to avoid a paper trail, the former minister paid for the property by moving the sum of $37.5 million in cash from her Abuja home straight in to the seller’s bank account.

The property is said to have 24 apartments, 18 flats, and six penthouses.

Since she left her position as Finance Minister following the expiration of President Jonathan’s term in office, Alison-Madueke has been at the center of investigations in to a series of multi-billion-dollar corruption scandals in the Nigerian oil industry.

Last month, court documents filed by the U.S. Department of Justice revealed that she had splashed millions of dollars on several choice properties in London and the United States through her proxies.

The proxies, businessmen Kola Aluko and Jide Omokore, are alleged to have received oil swap contracts worth more than $1.5 billion to sell Nigeria’s crude oil.

The oil swap contracts were a controversial barter arrangement, which saw Nigeria use middlemen to sell crude oil in exchange for refined products. With local refineries under- performing, oil swap deals were used to shore up local demand for petroleum products. 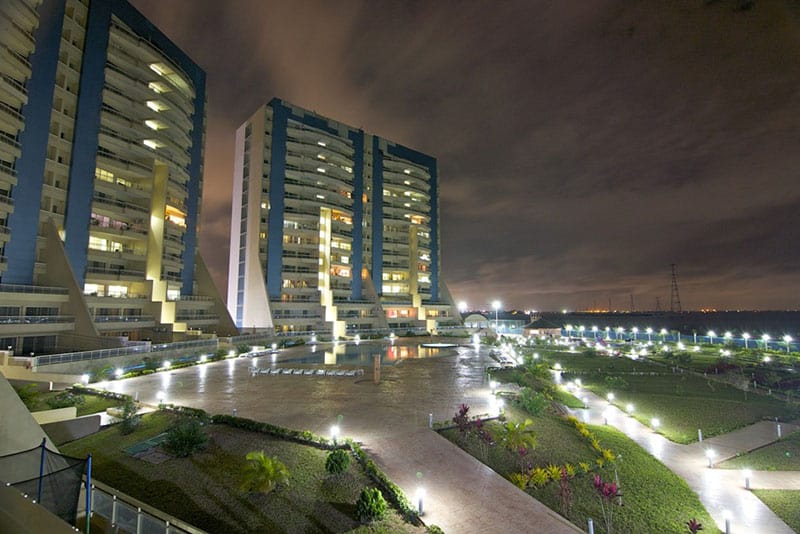 The 37.5 million USD property, which Diezani paid for in cash. Photo credit: Punch

It is no secret that corruption is rife within Nigeria’s oil sector, but under Diezani’s watch, it was reportedly elevated to a statecraft. The embezzlement and misappropriation of Nigeria’s oil wealth and the country’s principal foreign exchange earner was carried out on a truly astonishing scale.

The accusations against Diezani are not new: Even while she served as minister, she was the subject of several investigations by the anti-corruption committee of the Nigerian parliament. Under President Jonathan, though, she was something of a prima donna within the ranks of the executive, an untouchable who had the ears and, some say, the heart of the president.

Amid multiple allegations of graft leveled against her, Mr. Jonathan continued to shield her from prosecution from anti-graft agencies. In 2014, he famously fired the governor of the Central Bank for raising an alarm about the apparent payment irregularities within the oil sector.

Until her recent indictment by the U.S. Department of Justice, previous attempts by the government of President Muhammadu Buhari to bring Diezani before the law quickly fell under the weight of the partisan sentiments that frames Nigeria’s politics.

But the chicken appears to have finally come home to roost and it is now only a matter of time before Diezani does time in a penitentiary, after she must have forfeited all that she stole from Nigerian authorities.