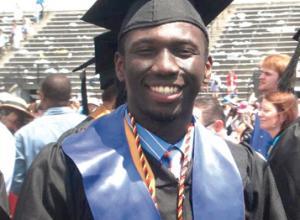 22-year-old Emmanuel Ohuabunwa has made history at the prestigious John Hopkins University.

This Nigerian student obtained a Grade Point Average (GPA) of 3.98 out of a possible 4.0 while earning a degree in Neurosciences at the university.

During the Johns Hopkins graduation last month, he was announced as having the highest honors and was the first black man to make a grade Point Average that high in Neurosciences at the University. As a result of this historic Achievement,  Ohuabunwa earned a scholarship to pursue his medical degree at Yale University.

He has also been inducted in to the Phi Beta Kappa Society, an honor society whose members include 17 US Presidents, 37 US Supreme Court Justices, and 136 Nobel Prize Winners. The Phi Beta Kappa society was founded on December 5, 1776 at The College of William and Mary. It is one of the oldest undergraduate societies and the oldest honor society for the liberal arts and sciences.

Ohuabunwa was born in Okota, Lagos and left Nigeria after his junior secondary school education. In an interview with Sahara Reporters, Ohuabunwa said,

“My parents moved the whole family when I was 13 years old…  When I got to the US, I was enrolled with my age mates, which meant at 13, I was in middle school….That was one of the darkest years for me because I encountered a lot of peer pressure. Some of the students, ignorant about Africa, bullied me and called me names such as ‘African booty scratcher’ because to them, Africans were dirty…

“I remember one day, when I was walking to the school bus, a boy came from behind and punched me in the face, called me an African and walked away. It took everything in me not to retaliate…My experience during that year gave me a thick skin. I learned to stand for what I thought was right even when the opposition seemed insurmountable. I also learned to look at the positive in all situations. Even though these kids were bullying me, I was still gaining an opportunity to school in America and nothing would stop me from making the best of this opportunity.”

African immigrants in the US are particularly known for high levels of academic achievement, 50% have bachelor’s and/or advanced degrees, as opposed to the 23% of native-born Americans.

Emmanuel Ohuabunwa has demonstrated the true extent of the tradition of excellence that will no doubt be continued in the future. He has a bright future ahead and it would only be logical to expect great things from this brilliant young man. Moreover, he has made all Africans very proud.