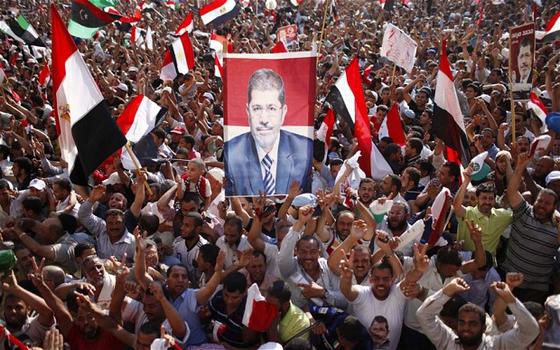 Egypt has announced Mohammed Morsi as its new president on Sunday.

Morsi, the candidate for The Muslim Brotherhood’s Freedom and Justice Party (FJP), is taking over an office last occupied by Hosni Mubarak for 20 years. He won against former prime minister Ahmed Shafiq.

World leaders from the US, the UN, Hamas, Israel, the Palestinian Authority, France, and many more have extended their congratulations and support to the new president of Egypt.

While votes were being counted, the military government of Egypt, the Supreme Council of the Armed Forces (SCAF), dissolved the parliament and drafted an interim constitution that stripped the presidential position from most of its power.

Morsi is Egypt’s first freely elected citizen and Islamist in the past six decades. The last four presidents were all military personnel.

Protestors in Tahrir Square celebrated as the results were read live on television. Ahmel Abdel-Attie, Morsi’s spokesperson, said "We got to this moment because of the blood of the martyrs of the revolution."

Egypt’s political shift culminated in this historic success; however, this success came at a heavy price. Since the ‘Arab Spring’  of last year, Egypt has been in a political vacuum for over 16 months. Though democracy was anticipated following the removal of Mubarak from power, his military rulers held a violent grip over the people of Egypt.

Following months of imprisoned activists and violent killings in Tahrir Square, Egypt is finally gaining some of the huge successes that it set out to achieve.

Morsi won with about 51% of the vote, a vote that is essential to the construction of a democratic future for Egypt.