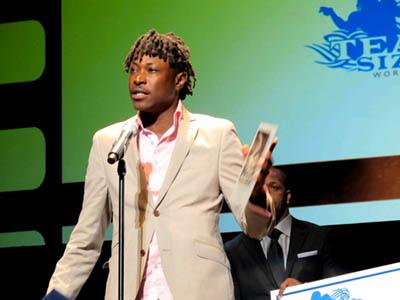 Amata was inspired by the Arab protests (called the Arab Spring by western media) and said, "It was a huge challenge that the Arabs posed to the rest of the world, especially the people in the Niger delta. If they can look at their dictators and say, 'No, we want a change,' there's no reason why people in West Africa can't stand up. And it's beginning to happen.”

In response to the many protests throughout West African nations, Amata made a film called "Black November" in reference to the month of activist Ken Saro-Wiwa’s execution in 1995.

The film discusses the western exploitation of the Niger delta’s oil resources, local involvement and the resulting violent resistance.

Amata’s wife, Mbong, was sent a death threat last year, allegedly from a militant group. In response to the incident, he explained: "I looked at it and said, 'If I'm going to tell the story, I'd better tell it irrespective of what some groups or government or companies think. I had been too conservative, trying not to make them look so bad. In [the first version], I'd blamed my own people, the Niger delta people, for part of the crisis. I put a lot of the blame on us."

Despite this negativity, Amata’s perspective is gaining popularity in the US and in Europe. His success may be a huge boost for what some affectionately call Nollywood, i.e. Nigerian Hollywood.

The corruption in Nollywood is another factor that may lead to a slow in growth. The industry produces on average about 2,000 films a year, but is focused more on quantity than quality. Actors and actresses who avoid paying taxes although some make $20,000 per film have also cast a negative light on the Nigerian film industry. There are less than 10 official cinemas in Nigeria, a lack that leads to an increase in piracy.

"Black November" will be released in both the US and Nigeria later this year. The film will be a refresher for US audiences who have been given more white-centric romantic comedies this past year than anyone would ever want to watch. Black November will be an insight into the US government’s role into a crises otherwise ignored in mainstream US media.