The celebrated Austrian filmmaker Ulrich Seidl has stirred the world yet again with the nerve-racking documentary entitled “Safari,” revealing the horrors committed by tourist hunters in Africa.

In “Safari,” Ulrich follows his usual entertaining filmmaking techniques on a series of chillingly magnificent hunting trips to a wildlife hunting lodge in Namibia. However, many have expressed their dismay and shock after watching the documentary.

For example, Peter Brandsaw wrote for The Guardian:

“The sheer smugness and chilling lack of imagination of these people playing the Great White Hunter is mind boggling as they slay impala and zebras with deafeningly loud and powerful hunting rifles – in controlled conditions which effectively disguise the fish-in-a-barrel nature of the experience they’re buying.”

In the film, Ulrich shows an ordinary Austrian family being trained on how to handle powerful hunting weapons and how to approach an animal once hit.

According to Brandsaw, this brutal and illuminating change of direction by the Austrian filmmaker from his usual comical drama is designed to provoke a legitimate distaste for the entire tourist hunting affair.

“The hunters’ conceited theatrical rituals, the get-up, and the vocab are especially infuriating,” Brandsaw adds.

Then Ulrich goes further to stage gruesome killings of wildlife animals, such as giraffes, impalas, and zebras whose dead bodies are then horribly paraded for trophy photos, mimicking what most African wildlife lodges look like.

The hunters arrogantly express their enthusiastic love of the hunt, while some lodge owners say they can’t express their views on the issue for fear of being viewed as racists.

What’s worse, the animals must be skinned and dismembered, mainly by black assistants who work at the lodge. The animals heads are then mounted on the wall for interior décor as the rest of its body is sold as game meat. 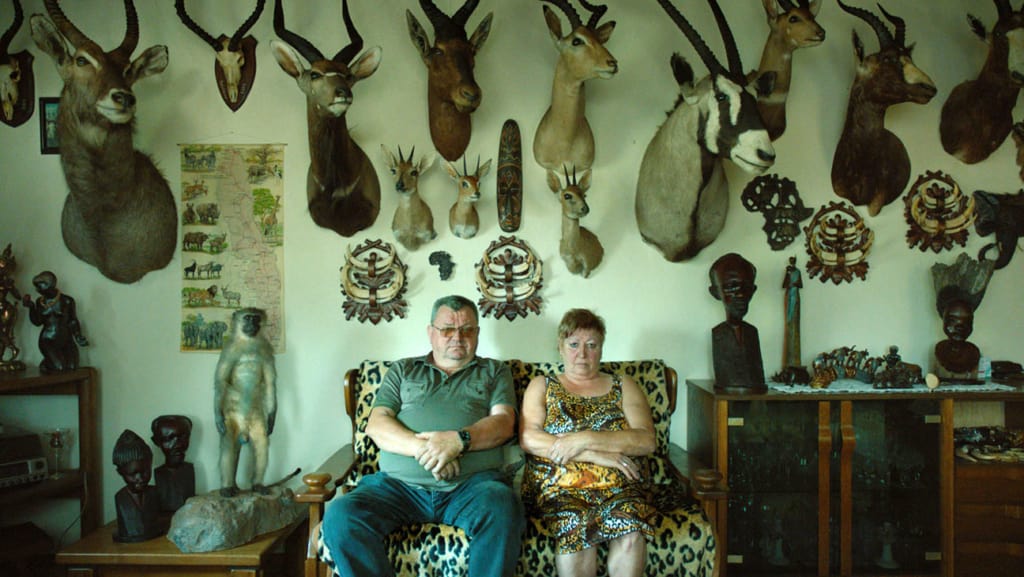 Ulrich is known for creating films that are uncomfortable to watch as a way of shedding light on different societal problems and provoking revolt.

“His procedure is more about creating a grotesque world, or isolating the grotesque elements of the world he sees, and then shinning a cold, clear light on it. It’s very uncomfortable but legitimate film-making,” Brandsaw concludes.

In an interview with the Austrian Film Commission Ulrich said the inspiration to do “Safari” came from his wish to confront the subject of tourism hunting in Africa.

“”I’m interested in hunting because it shows something about human nature; it confronts the subject of killing and the relationship between people and the animal world while also throwing up questions about the power human beings hold over nature,” Ulrich said.

Africa has been struggling with the problem of poaching and illegal wildlife hunting for many decades and this film is a stark reminder of the importance of protecting endangered African wildlife.

Watch the “Safari” trailer here (Click the tools icon to change the subtitles to your language of choice):