Tens of thousands of Swazi virgins braved the baking sun to perform the traditional reed dance in front of several heads of states who attended the opening of 36th South African Development Community (SADC) summit in Swaziland Tuesday, according to Anadolu Post.

The young maidens swayed and swerved in their colorful traditional attire while stamping their feet on the ground in unison to the amusement of thousands of attendees who witnessed the ancient Swazi traditional carnival.

The three-day summit ended Wednesday in a ceremony held at the Royal Palace of the Kingdom of Swaziland in Lozitha, where King Mswati III was elected the chairperson of the community.

“There is need for the region to intensify resource mobilization efforts in order to become a strong economic bloc. To have such a bloc is important if our continental vision of creating infrastructure that will enhance cooperation and integration is to be realized,” King Mswati III said in his closing remarks. 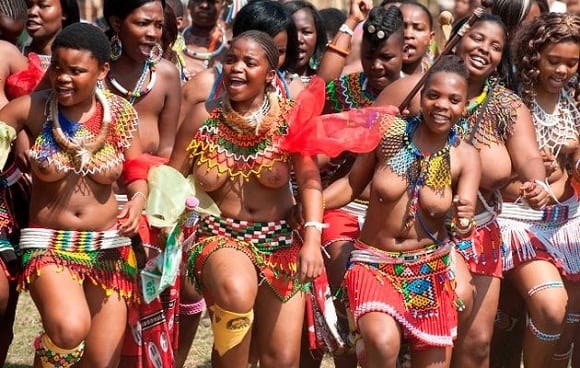 The reed dance is a centuries-old tradition among the Zulu people, involving singing, dancing, virginity testing, and other traditional activities that are designed to help prepare young girls (virgins) for womanhood.

The annual event, locally referred to as the Mkhosi woMhlanga, takes place in September, right at the beginning of spring at the eNyokeni Palace in Nongoma, Zululand.

It’s an important rite of passage for young Zulu girls, and it lasts for about three days, giving older Zulu women an opportunity to teach the young girls, who must be virgins to participate, the morals of a grown woman.

The climax of this event is the presenting of reeds to the King. Each girl is expected to wear a traditional intricately beaded outfit, most of whom are bare-chested, as she offers a cut reed to the king.

The tradition also permits the King to choose a new bride from the crowd every year during the reed dance; every girl tries her best to be picked as the bride.

Critics of the reed festival fault the ceremony as retrogressive, though, with its parading of young girls bare chested and the testing of their virginity.