March of this year, Juliana Kanyomozi returned to the East African music scene with the track, I’m Still Here. The Ugandan songstress took a two-year hiatus from the limelight due to the devastating death of her 11-year old son, Keron.

His cause of death was a severe asthmatic attack. Dealing with the loss of her only child was what inspired her latest song, which is about withstanding the trials and tribulations life throws at you. Although it is evident from the chorus, she has since said the following:

I’m Still Here is a song inspired by not only my life but by a multitude of experiences and challenges in general as well as the human power to overcome and conquer the insurmountable! it’s a song for everyone, it’s a mirror for all of us.

As much as I am here for the message of the song and I sympathize with her, I cannot feign ignorance, as far as the music video is concerned. And I know for a fact that I am not the only one who sees the mock-up of it all.

I remember watching the music video for the first time. Before I completely watched the whole video, I could already tell that scenes of her music video were copy pasted from videos of artists like Jennifer Lopez, Meghan Trainor, and Beyoncé.

Also, I could instantly tell which exact songs had been copied. I quickly logged on to the internet to check whether someone had made this observation, and sure enough, I found a video by Scoop on Scoop.

Note: If you have not watched the music video, I highly recommend you do so. Come back, and I will prove exactly what she copied and from who. 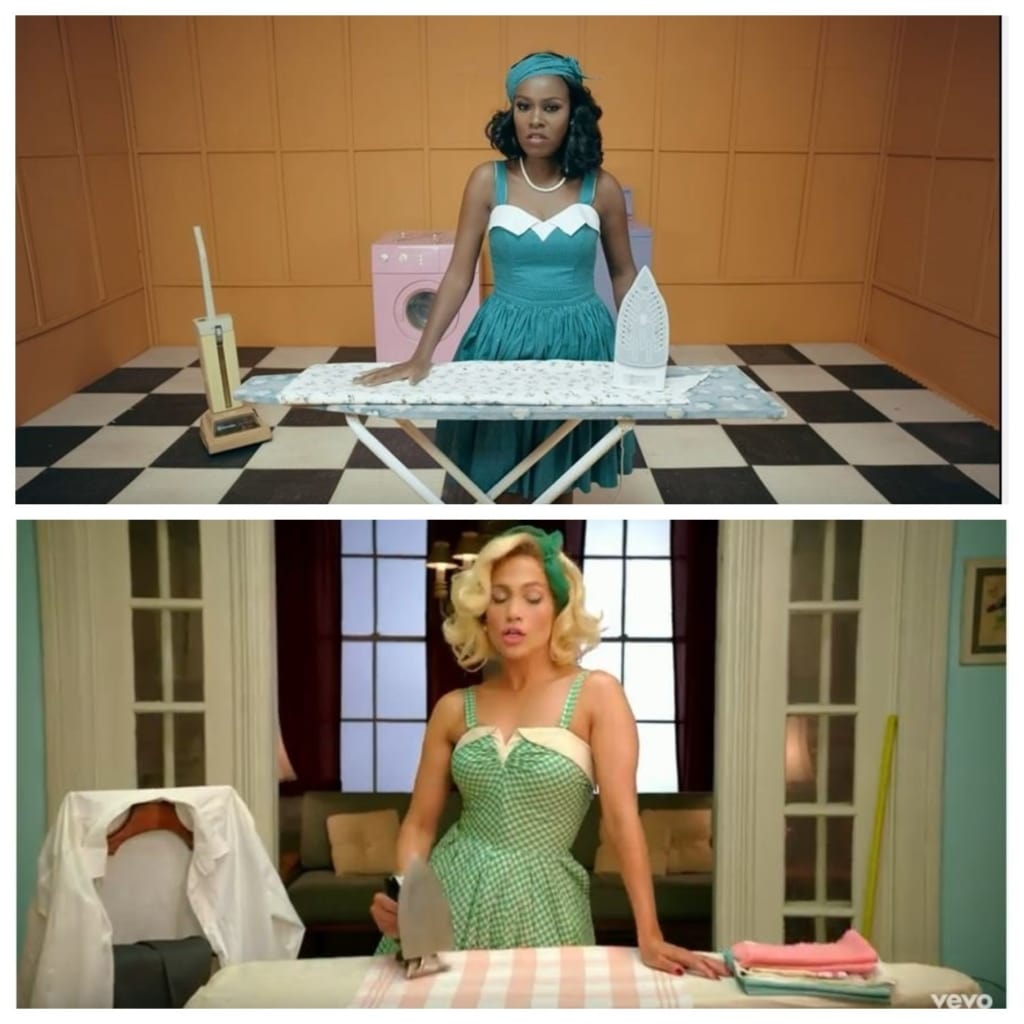 As you can see, both songstresses are dressed in similar retro pinup dresses and are ironing clothes. Also, the backgrounds have slight similarities. 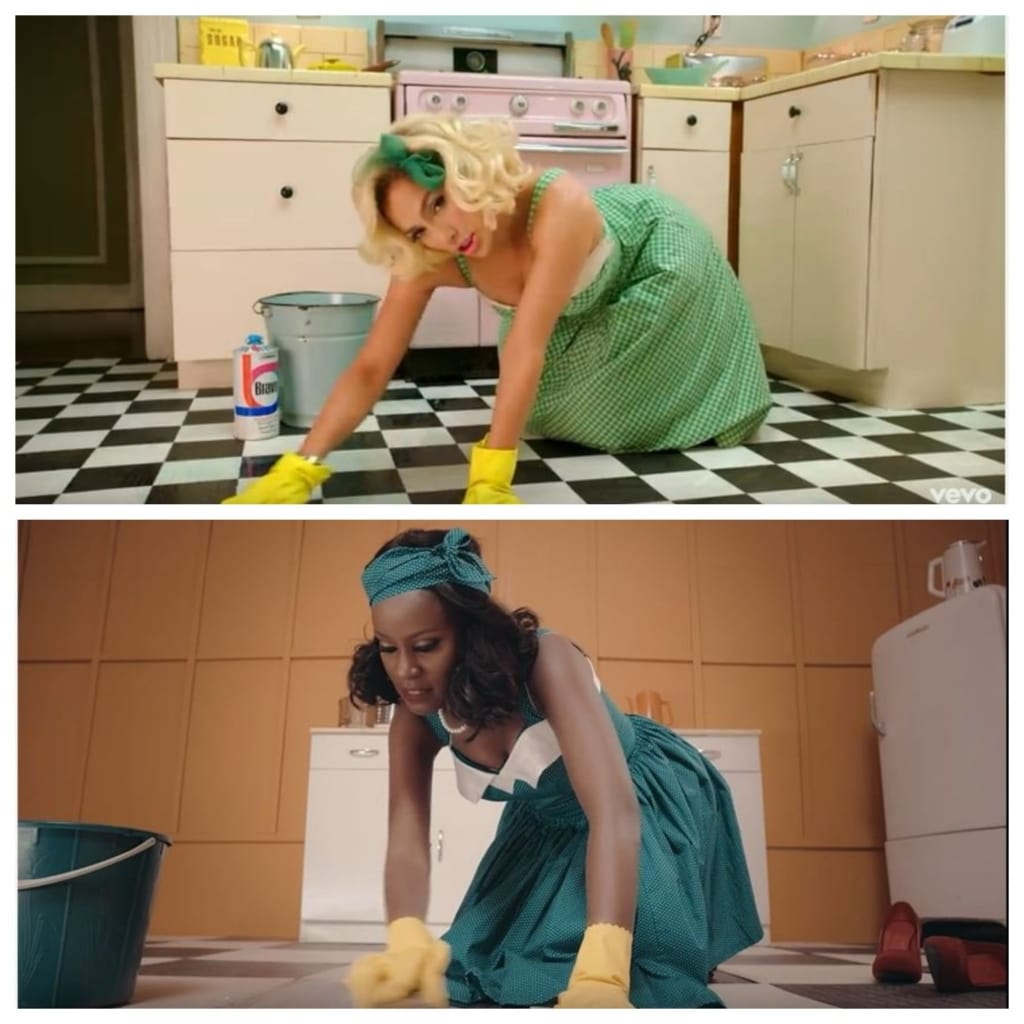 The same goes for this scene. Both singers are cleaning the floor with a hand brush, a pail of water in sight while wearing yellow gloves. Again, both sets look alike. 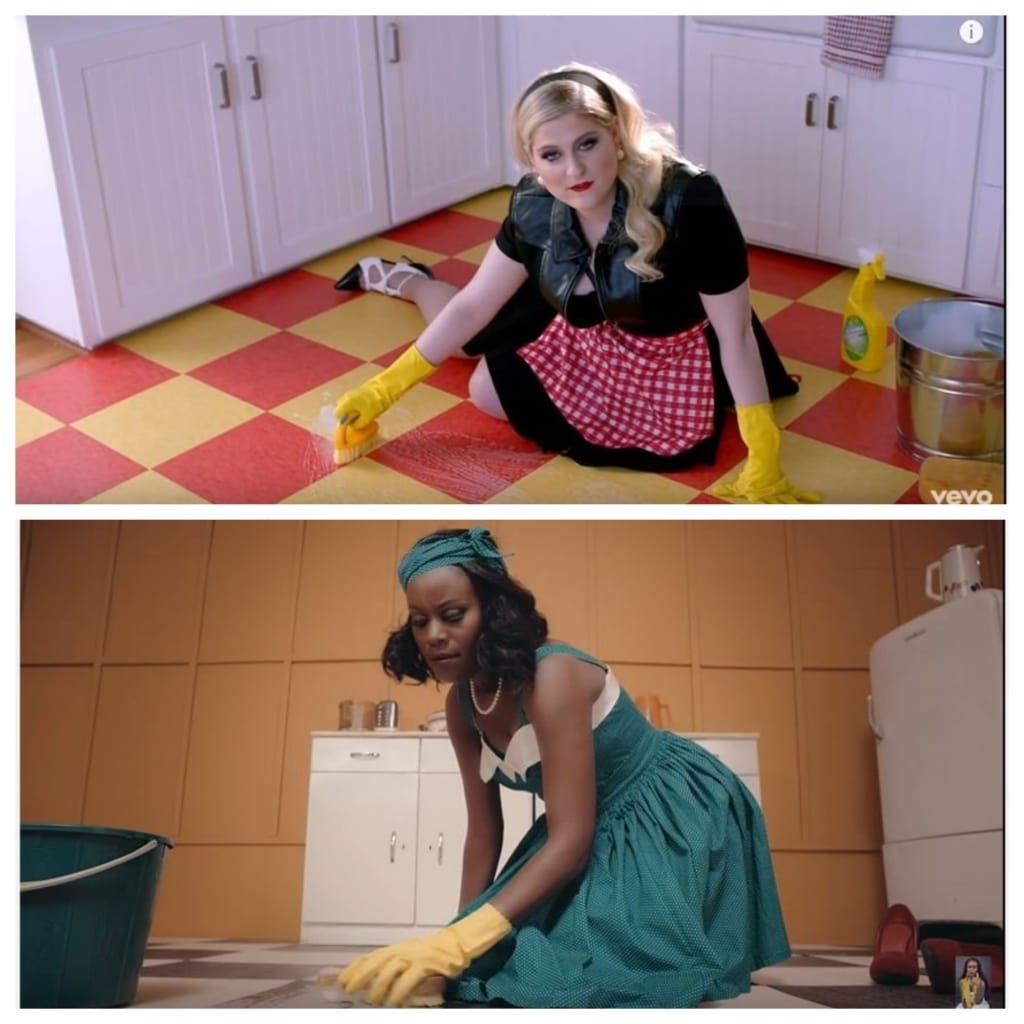 Again,  this is the same retro, 1950s housewife aesthetic. But before J-Lo’s  Ain’t Your Mama, there was Meghan Trainor with Dear Future Husband. 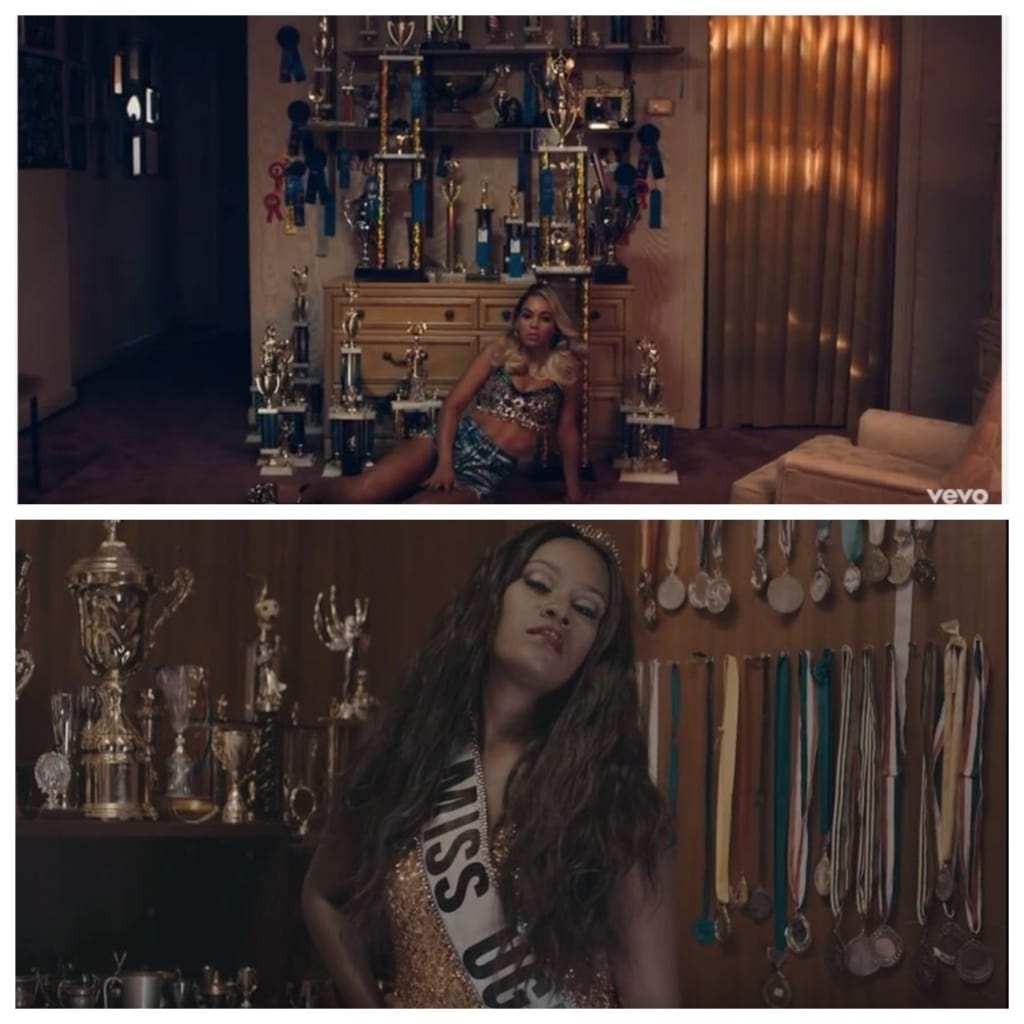 In Pretty Hurts, Beyoncé is seen standing behind a collection of trophies from beauty pageants. Well, Juliana is seen doing the same, she even takes it a step further and wears a sachet that reads, Miss Uganda. 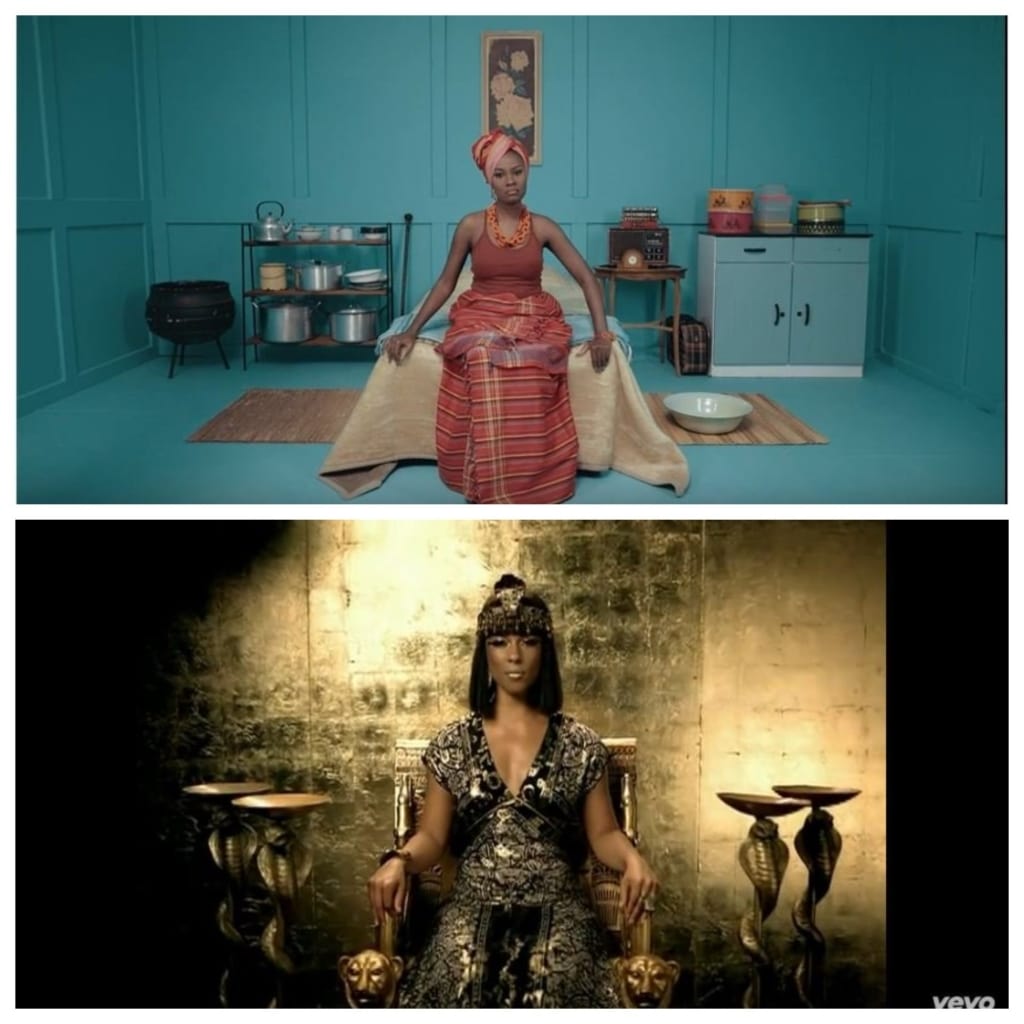 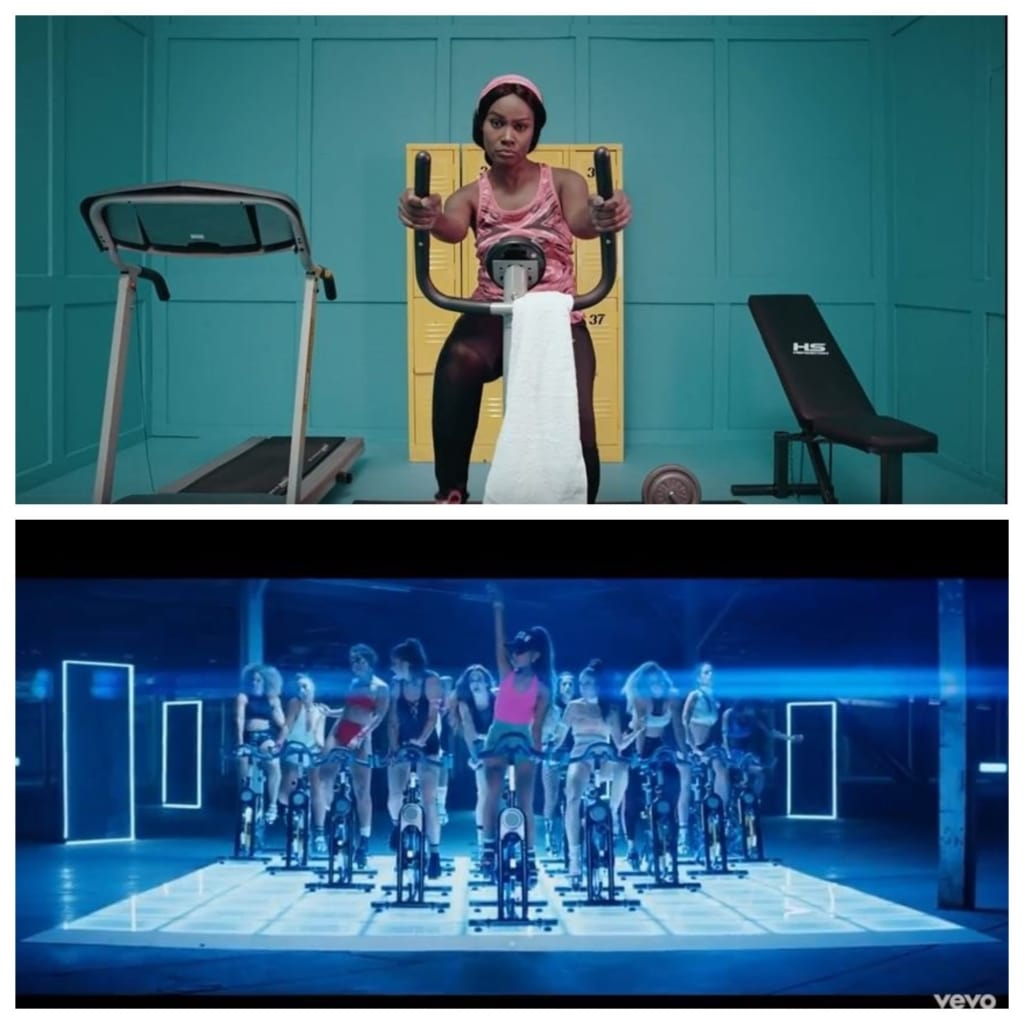 Juliana Kanyomozi (Top). Ariana Grande in Side To Side (Bottom).

Another source, All Africa, claimed she had also copied from Ariana Grande’s Side To Side and Alicia Keys’s Superwoman as well. I do agree with the Alicia Keys bit, but I beg to differ with the Ariana Grande part. Although I understand why people would think so, I believe that the treadmill scene was also borrowed from Beyoncé’s Pretty Hurts. 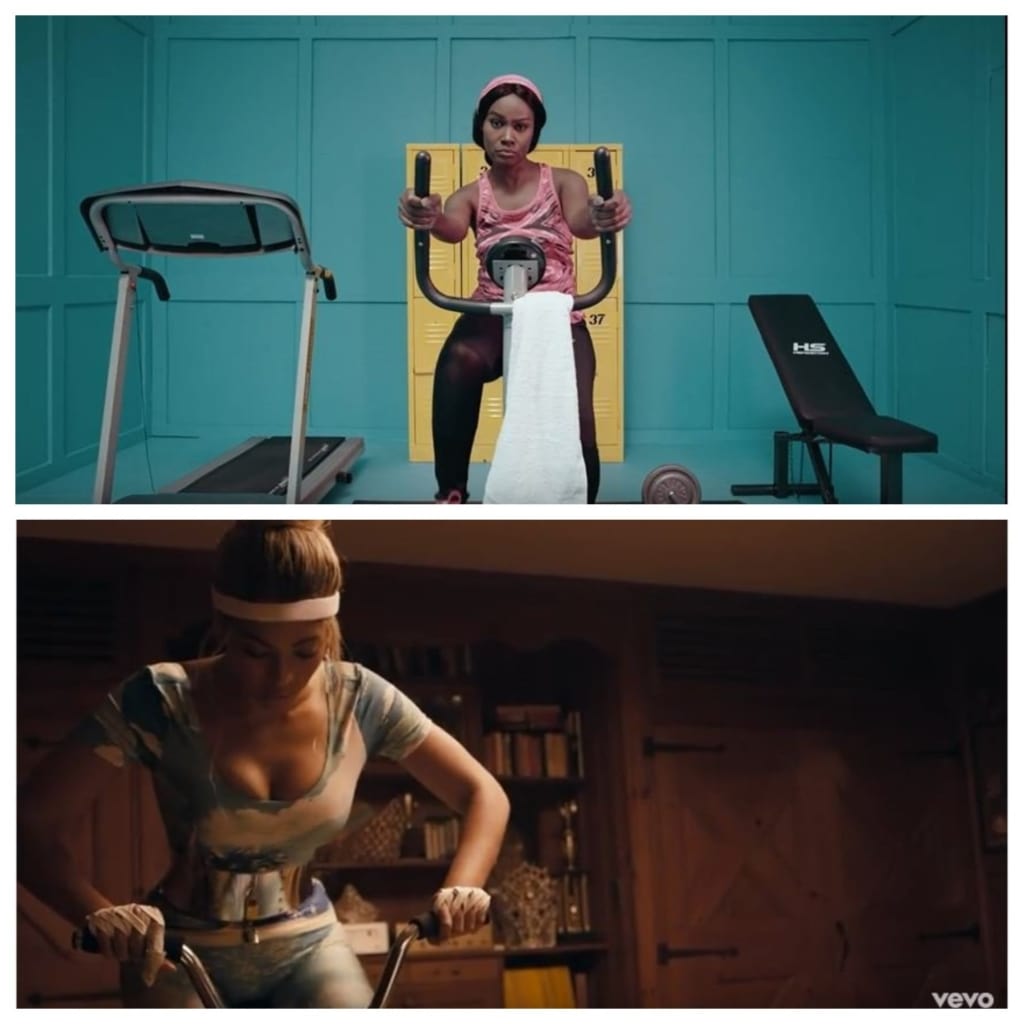 Unsurprisingly, people took to social media to either call her out or praise her. There were those who questioned whether she thought she could get away with it. And there were those who were praising the quality of the music video. But to be quite fair, the blame should not fall solely on the Afro-pop singer.

I am sure she has a team of professionals who are responsible for overseeing the creative decisions. And by professionals, I am referring to the director, cinematographer, scriptwriter, wardrobe stylist etc. (Honestly, where were they in the midst of all of this? ) But on the other hand, it is not to say she has no authority over the creative decisions of her personal brand.

You would think that after facing so much criticism she would break her silence on the matter-Not quite. The singer went on for some time without addressing the matter. It was not until April when she had an interview with Crystal A. Newman on her radio show the Celeb Select. She went on to quote her sister who supposedly said the following:

What guys do not understand is, when it comes to art there is never anything new. There is nothing you will ever do, and you happen to be the first one to ever do it.

I’m telling you. Look at Beyoncé! Everything she has ever done, people come out and oh my gosh she stole it from… But it is not really stealing. It is not even copying and pasting. Like come one! It is an inspiration. You get inspired by something else and for me it wasn’t a direct inspiration from J-LO.

Because we were creating um… The script was written by Candace is Justin Campos’s (video director) wife and partner. And Candace was inspired by Wes Anderson. You can go and Google Wes Anderson and find out what he does. But the colour, themes. And all these bright colours and all these things were… Mostly her inspirations came from that. And what she was trying to do was create different characters.

Now, I did these roles because they appeal to me in many different ways. I am a kind of woman who cleans my own house. And by the way I am not saying this (you know) because I want people to think, ‘Oh she’s amazing’. No. No. No. I don’t have staff at my house. I… (I’m not playing). I mop my house. I cook my own food. I do my laundry. I iron. I do everything myself. And it’s because naturally I am a very… I’m a perfectionist and I love doing housework. For example when it comes to cooking, I love cooking. I just love it. So these are the things that are appealed to me. So when I saw that idea I said, ‘Wow, this is so me. I know what this means’. Because this is what I do at home. I mop my house, I have my old yellow gloves at home.

I saw someone saying, ‘my god she even bought, she even used the same gloves as J-Lo. My dear friend, the gloves in the supermarket are all yellow. They are all yellow. So there is nothing that you are going to do in the arts that has never been done before. So let us just celebrate, and look it is a beautiful song. It’s got a deep meaning. It’s got an inspiring and uplifting song. Why would you go and concentrate on a few seconds of that video and leave the entire beautiful video and just decide to criticize that small thing. Let’s celebrate the good things, and let’s uplift each other. Because that’s what we are all trying to do. We are trying to take this industry to the next level.

To listen to the rest of the interview, click here.

Firstly, here is my problem with this whole thing. It is not to say that the whole 1950s housewife, retro aesthetic solely belongs to J-Lo or any other artist. It does not! Neither is it to say that it is a new, unexplored theme or concept. Because it really is not. So, what Juliana Kanyomozi and her team failed to realize is that replicating someone else’s concept/work in the name of drawing inspiration still counts as plagiarism.

Secondly, not only was the concept stolen, it was also inconsistent. The lyrics of the song itself and the music video were incompatible. They did not seem to go hand in hand. She sings about going through hardships, but the music video failed miserably at conveying at least an ounce of that inspiring, beautiful message.

Thirdly, we must understand the following scenes were included in the respective music videos because they suited the song. For instance, in Pretty Hurts, Beyoncé goes to sing about the price one has to pay to be attractive. In Superwoman, Alicia Keys embodies the power and strength of women. And so forth. But even after Juliana explained the creative process behind her music video, I still found a disconnect and inconsistency between the video and song.

I will admit it, I find the music video’s aesthetic quite appealing. But that does not negate the aforementioned reasons why I think it was plagiarised. And let us be careful when it comes to critiquing art. Instead of dismissing the criticism with at least the music video was high quality, or let us not concentrate on the negatives, we should be giving constructive criticism because that way there is a chance of improvement. Perhaps, we should start by asking the following; Was there a disconnect between the song and video? What is the relevance of the retro-inspired style in this specific song? Did the music video fail to serve its purpose?

All in all, there is a fine line between drawing inspiration from someone’s work and producing a replica with a few tweaks here and there. And it seems as though Juliana Kanyomozi and her team failed to understand the difference. It is one thing to get inspired, but it is another thing to rip off someone else’s work all in the name of inspiration.