Have you ever gone to an African party and seen one auntie’s face eerily whiter than her neck or hand? The knuckles are so dark that you begin to wonder where the light skin came from?It doesn’t take a lot of guess work because it is immediately observed that she most likely bleached her skin.

A visit to a market in her home country, say Nigeria, Ghana or Kenya, would reveal an array of products, creams, lotions, and soaps which promise lighter skin.

It raises a question ‘Why do African women bleach their skin?’

It is not the easiest question to answer because the answer might be more deeply rooted than we know. A psychological study from the Journal of Black Studies titled From the Psychology of Race to the Issue of Skin Color for People of African Descent states that, “skin bleaching is related to the lack of self esteem due to cultural self-hatred.”

This is based on the stereotype that a lighter skinned person is more attractive, wealthier, and has more status than a darker skinned person. Some women and even men bleach their skin because they feel that by so doing they can compete with their lighter skinned counterparts. Bleachers want to be accepted within their circles in society and seen as attractive by the opposite sex, but don’t seem to put into consideration the dangers of bleaching the skin.

Skin whitening or bleaching is a dangerous cosmetic process that lightens the skin color through various harmful chemicals found in whitening products. These products block the production of melanin, the pigment that gives skin its color. Melanin has another key function and that is to protect the skin from the sun’s harmful ultraviolet rays. The use of these creams, lotions and soaps, especially over a long period of time has negative, dangerous and harmful results. They strip the skin of its protective layer and leave it defenseless and more susceptible to developing skin cancer. The main active ingredients in these products include hydroquinone, mercury, arsenic and alpha hydroxy acids.

The initial use of these whitening products might bring the desired result of lighter skin; however, the long term effects are not desirable and often irreversible.

Once applied to the skin, the products react with ultraviolet rays and re-oxidize, forming darker pigmentation and decreasing collagen production, both side effects which lead to premature aging.

Another condition caused by skin bleaching is ocronosis, where the pigment underneath the skin is reduced, causing the skin to look leathery and form stretch marks. Additional results of bleaching are blotchiness, severe skin irritation, severe burns, acne, and premature wrinkling.

Although the cosmetics industries in Europe and North America have strict regulations governing their cosmetics industries and the use of some of these ingredients such as hydroquinone and mercury have been banned, there remains an incredibly high demand in our African countries and in the Diaspora for skin whitening products. They are often imported from small operators in Asia and Africa and sold in markets and stores all over the world.

For many of us, the ideal of beauty has become too directly linked to skin color, where a lighter skin tone will take you further than having a darker complexion. The models on the runways are mostly of Caucasian heritage; hardly do you see black models, though that has improved in the past few years.

The images we see on television and in magazines don’t help either because they simply perpetuate this idea that the lighter you are the more beautiful and successful you are.

We have to create awareness of the dangers of skin bleaching. We also, if not foremost, have to make a strong effort to convince both women and men that they are beautiful just as they are. We should not permit social messages and contemporary ideas to affect our identities.  It might be as arduous as informing people about the dangers of tanning beds and sunbathing, but it will be a very worthwhile task, especially within the African community. 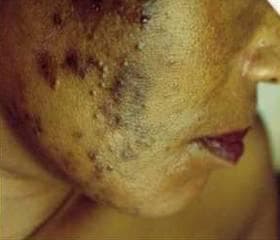 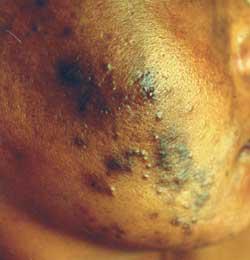 Most women and men want the results shown in the first image but these are some of the adverse results that they have to deal with instead.