Zerai Deres’s act of devotion towards a religious memorial would forever change the course of his life. 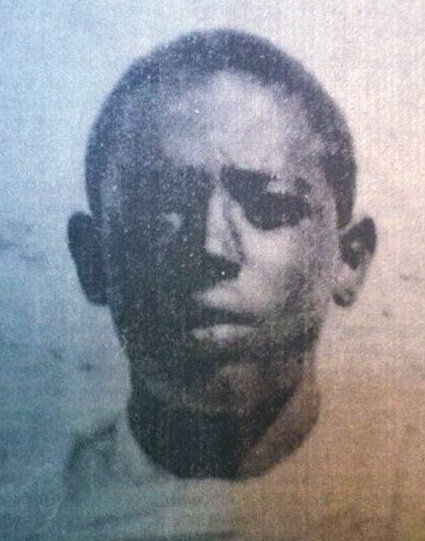 On June 15, 1938, Deres went to the Princess of Piedmont Boulevard and knelt down at the Monument to the Lion of Judah in Rome, Italy. As he prostrated, a small crowd attempted to stop Deres. Deres then brandished a scimitar – a sabre with a curved blade and stabbed an officer, a private, a state employee and an infantry chief. The mayhem ended when two soldiers fired their guns. Deres was struck in his thigh; he endured four shots.

Derai’s violent protest was considered an act of madness. Derai was hospitalized then taken to the criminal asylum, Vittorio Madia.

Deres was born in 1914 in Italian Eritrea.  More specifically, in the province of Serae.

He was a member of the Tigrinya ethnic group.

He converted to Catholicism and attended colonized schools which enabled him to speak Italian fluently.

After the Yekatit 12 massacre, Deres was hired as a translator for Ethiopian aristocrats deported to Italy. He arrived in Rome in the summer of 1937. He was 23-years-old.

As Deres stayed informed about the colonial war occurring in Ethiopia, he became angrier and felt hopelessness about the state of affairs occurring.

Deres planned a trip back to his native land.  Before he was due to leave, one day during lunch he knelt at the base of the Monument to the Lion of Judah.  The monument was a symbol of monarchy in Ethiopia; dedicated to the coronation of Emperor Hailé Selassié in 1930.

The Monument to the Lion of Judah was transported to Rome as ruins of war by the Italian fascist regime in 1935.

As Deres carried out his devotions, a crowd gathered around him and attempted to dissuade him.  Deres pulled out his sword and stabbed an officer while denouncing Italy and the Duce and praising the Negus.

At the end of the violent confrontation, Italian Railways private Vincenzo Veglia, State employee Ferdinando Peraldi and Infantry Chief Marshal Mario Izzo had all been wounded.

There was also documentation that stated that a butcher boy who was passing by as the incident unfolded was also injured.  The boy reportedly threw his bicycle at Deres.

Because of the attack at the monument, Italian dictator Benito Mussolini accelerated the deportation of Abyssinian nobles who were not welcome in Rome.

After being hospitalized at the Umberto I Policlynic, Deres was transported to the Barcellona Pozzo di Gotto, the portion which housed the criminal asylum.

Deres was incarcerated for seven years. During that time, he kept in contact with his brother, Tesfazien Deres.

Deres also professed his sanity. He stated, “I’m fine. Always have been, and still am, in full possession of my mental faculties. I am in the Asylum only on account of government policy.”

Tesfazien advocated for his brother’s freedom by writing a letter to Emperor Selassié and approached Minister of Foreign Affairs Ambaye Wolde Mariam to present the case to the Imperial Palace. Both efforts proved to be unsuccessful.

Tesfazien finally reached his brother in 1939 but could do nothing to gain his freedom.

Deres died on July 6, 1945, after being imprisoned for seven years.

Tesfazien fought a lengthy battle to send his brother’s body back to Eritrea. Deres was finally buried in St. Mary’s Church in Hazega.

After his death, Deres’s story was dramatized and he is revered as a National folk hero in Ethiopia and Eritrea.

In 1966, the sculpture of the Lion of Judah was returned to Ethiopia. Selassié spoke about Deres’s religious and political gesture at the dedication ceremony at Addis Ababa.

In 2016, Deres’s likeness was depicted on Ethiopian stamps as part of the Ethiopian Postal Service’s national hero’s series.