He is not only referred to as the first African to be appointed into the French National Assembly, Blaise Diagne is the Senegalese politician who is also considered the pioneer of the modern African and Pan-African politics. He is also noted as the pioneer of the Black African electoral politics and he sought justice for all regardless of race.

Blaise’s birth name was Galaye M’baye Diagne. He was born on October 13, 1872, to a cook father and a servant mother on Goree Island, in Senegal. Blaise was placed in several homes to be catered for due to his family being poor and was finally adopted by Adolphe Crespin, the head of a Christian family that had the political rights of French citizens with the privilege of electing a deputy to the French National Assembly. Adolphe baptized Galaye and rename him Blaise Diagne.

Blaise completed his primary school education in Senegal at the Brother of Ploemel school and later travelled to France to complete his secondary school education. Blaise returned to Senegal in 1891 where he sat for and passed the French Customs Service entrance examination. His success in the examination saw that he worked as a customs agent between 1892 and  1914.

For 22 years, he served as a customs agent in Dahomey which was his first posting and later in Dakar, Madagascar, French Guyana and the Island of Reunion. He was not shy to voice out his opinion on the discrimination of black people in the colonies.

In 1914, he defeated six European candidates and was elected to the National Assembly in Paris as the representative of four communes in Senegal, a position he held until he died in 1934. He contested after ending his work as a customs agent and returned to Senegal.

Two years after his appointment in 1916, Blaise successfully convinced the French parliament to approve and pass a law which granted all residents of the Four Communes of Senegal, the oldest town in French-controlled West Africa full citizenship. In 1948, the second republic of France extended citizenship to inhabitants of Saint-Loise, Dakar, Rufisque and Goree.

Blaise Diagne was very instrumental during the World War I and recruited thousands of West Africans who fought on the forefront for France. Right after the war, he served as Commissioner General of the Ministry of Colonies and represented France in the International Labor Office in 1930.

From 1931 to 1932, he served as a junior cabinet officer under the Secretary of States for the colonies and served as the Mayor of Dakar until 1934.

Diagne also served as President of the International Pan-African Congress and made prominent Pan-Africans such as Marcus Garvey and W.E.B Du Bois join the Congress.

In between his successful political career and campaign, Diagne established the Republican Socialist Party in 1919. The party won control over the four local governments in the four communes. He also founded the La Democratie newspaper which was later renamed L’Ouest Africain Francais.

Diagne died of Tuberculosis on May 11, 1934. Many are of the belief that he was a member of the Freemason and therefore was not buried in the Muslim Cemetary of Soumbedioune in Dakar due to this. 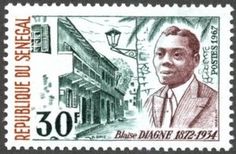 His son, Raoul Diagne would later become the first black footballer in France.