You may recall the Supreme Court case Loving vs. Virginia in which Virginia couple Richard and Mildred Loving, who married in Washington, D.C., in 1958, were arrested in their home for having violated the state’s ban on interracial marriage.

The couple were forced to move away or be jailed, and spent years fighting the racist law that affected them until the Supreme Court unanimously overturned it.

Before this case was decided on June 12, 1967, black-white romantic relationships were seen as illegal and a social taboo.

Hollywood had then shown discomfort with interracial couples, that it was unable to handle such interracial relationships and deal with the reality of interracial love in its movies.

Change, however, came in 1964 with the release of “One Potato, Two Potato”, a movie that dealt with the reality of interracial marriage in a more serious way. 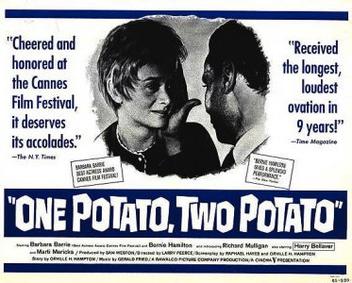 The movie was loved by many when it was released

Released three years before Guess Who’s Coming to Dinner, and one year before the Voting Rights Act, One Potato, Two Potato is about a white divorced woman who falls in love with and marries an African-American man.

When her ex-husband sues for custody of her child, arguing that a mixed household is not a proper place to raise the child, the new African-American husband had to fight for his parental rights in court, fighting against a judge who represents the prejudices of the era.

Directed by Larry Peerce and shot in its entirety in and around the small northeastern Ohio city of Painesville, “One Potato, Two Potato” received all the cheers for displaying such emotional and political courage in telling the stories of interracial couples.

The screenplay, written by Orville H. Hampton and Raphael Hayes, was also nominated for Best Original Screenplay at the 1964 Academy Awards.

Watch the full movie below: