A new World Bank poverty assessment report has shown a significant decline in the number of Ugandans living below the poverty line.

According to the Monitor, the proportion of Ugandans living below the national poverty line reduced from 31.1 percent in 2006 to 19.7 percent in 2013.

This progress makes the landlocked East African nation one of the fastest countries in sub-Saharan Africa to reach the millennium development goal of reducing its population living on $1.90 per day or less, shrinking the number of poor Ugandans from 53.2 percent in 2006 to 34.6 percent in 2013.

Uganda is considered one of the world’s poorest countries. It is also considered one of the most corrupt, with Transparency International rating it on a scale of 1 to 10 (with 10 being the least corrupt) a 2.4. The country has a population of about 38 million people, with a per capita income of $2,071 and a GDP (PPP) of $85,104 billion. The country earns most of its foreign exchange from the export of coffee, tea, and copper. 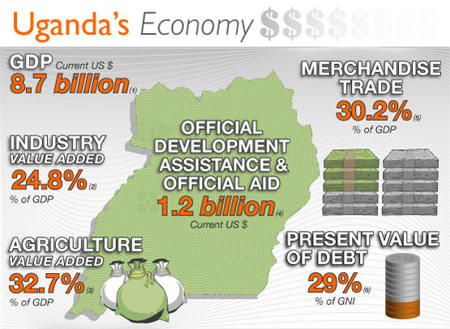 The Ugandan economy has witnessed renewed growth in the last few years, lifting many in the population out of poverty.
Photo Credit: UG Facts

With the recent discovery of crude oil in commercial quantities and the renewed spate of economic reforms, Uganda has witnessed some economic growth in the last couple of years. However, that growth has not been very inclusive with some parts of the country seemingly left behind and showing dismal results.

According to the World Bank, “Progress was slower in the country’s north and eastern regions, which have [the] least well-off and marginalized population.”

The World Bank data also showed that northern Uganda experienced a rise in poverty levels despite international efforts to provide aid and relief to residents of the region who are victims of a drawn-out conflict between government forces and the rebel movement known as the Lords Resistant Army, which has caused hundreds of thousands of internally displaced people.

The report put poverty prevalence at a higher rate in the North and East, with 43.7 percent and 24.5 percent of the population living below the poverty line, respectively, compared to the central region, which was at 4.7 percent and the west at 8.7 percent.

In education, the teacher to pupil ratio was 1 teacher to 53 pupils in Western Uganda, 1 to 47 in central Uganda, and a massive 1 to 136 in northern Uganda.

Reacting to the World Bank report, Minister for Planning David Bahati said that authorities are aware of the imbalance but this was caused by insecurity in these areas for more than two decades.