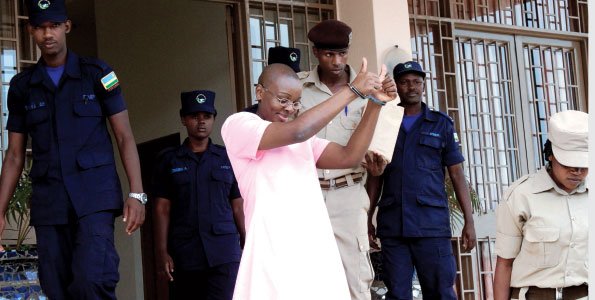 Born in October 1968, Victoire Ingabire Umuhoza is currently serving a 15-year prison sentence at the Kigali Central Prison on charges of terrorism and threatening national security.

She was arrested in 2010 after she returned to her country following 16 years in exile to contest as a candidate against Paul Kagame in Rwanda’s August 2010 presidential election.

Umuhoza was the leader of the coalition of exiled opposition political groups, Unified Democratic Forces (UDF), and she resigned her work as an official of an international accounting firm in the Netherlands, where she was in charge of its accounting departments in 25 branches in Europe, Asia and Africa, to help rebuild her country.

She has worked for her party since 1997 from her base in the Netherlands and was key in the creation of the coalition to rival the dominant Rwandan Patriotic Front (RPF) party of Paul Kagame which has no opposition in the country and was stifling dissent and persecuting opposition members.

Umuhoza was held under house arrest only three months after arriving in the country. She formed the Permanent Consultative Council of Opposition Parties with two other opposition leaders in Rwanda to strengthen the democratic process.

She became a threat to Kagame’s government since the first day of her arrival when she gave a speech at the Gisozi Genocide Memorial Centre to honour the victims of the genocide. Umuhoza called for the acknowledgement of Hutus who also died during the genocide and justice for all to bring about reconciliation.

This speech was used as evidence for the charge of genocide revisionism which was levelled against her in court after her arrest. She was placed under house arrest in April 2010 and then detained in October with four alleged co-conspirators accused of “forming an armed group with the aim of destabilising the country, complicity to acts of terrorism, conspiracy against the government by use of war and terrorism, inciting the masses to revolt against the government, genocide ideology and provoking divisionism.”

After a long court battle including intimidation of witnesses and allegations of bribery attempts by the Rwandan intelligence agencies to rebels to testify against Umuhoza, Victoire Ingabire Umuhoza boycotted the court proceedings.

In 2012 after four postponements of the verdict and the prosecution’s request for the maximum life sentence, Umuhoza was sentenced to eight years by the Kigali High Court for “conspiracy against the country through terrorism and war” and “genocide denial”.

A year later, the Supreme Court has upheld the conviction and increased her jail term to 15 years.
Victoire Ingabire Umuhoza is married and a mother of three. She was nominated with two other Rwandan political figures in prison for the European Parliament’s Sakharov Prize for Freedom of Thought in 2012.