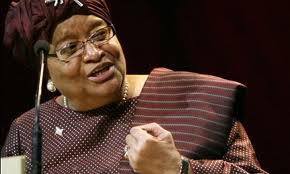 Liberia's president, Ellen Johnson-Sirleaf, has quite a number of outstanding accomplishments to be proud of. Sirleaf is a Harvard University alum as well as a successful economist and activist. Until late August, her most notable accomplishment was becoming President of Liberia in 2006 and the first female head of state in African history, but last week President Sirleaf added one more to her list: Noble Peace Prize winner.

"I received the news through my special assistant and it is indeed an honor," said President Johnson-Sirleaf in a brief statement issued in Monrovia, Liberia. "I am accepting it on behalf of the Liberian people. Each of them has contributed to this peace." Sirleaf shares the honor with two other women, peace activists Leymah Gbowee and Tawakkul Karman. All are being honored for their women's rights work.

Gbowee, another Liberian woman, is a former social worker internationally recognized for organizing the peace movement that eventually led to the end of the country's second civil war in 2003. Her efforts are believed to have resulted in the election of President Johnson-Sirleaf in 2005. Sirleaf and Gbowee's co-recipient, Tawakkul Karman, is a Yemeni journalist turned politician. Karman is known in Yemen as "the Mother of Revolution" and will become the first Yemeni woman to win the prize.

The women will join 10 others in Stolkholm on December 10, 2011 for the Nobel Prize ceremony.