43 people have been reported dead following a tragic bus crash along the Harare-Chirundu highway in Zimbabwe.

According to The Herald, the accident occurred on Wednesday evening when the driver of a Zambia-bound King Lion bus lost control of the vehicle, veering off the road and ramming into a tree.

“The bus was travelling to Zambia when the driver lost control at a curve yesterday evening,” Charity Charamba, Zimbabwean police spokeswoman told AFP.

Reports say most of the passengers were cross-border traders who usually travel to Zambia from Zimbabwe to stock up on goods to sell back home.

Witnesses say the driver of the 69-seater King Lion bus was travelling above the speed limit, despite repeated warnings from passengers urging him to exercise caution.

According to the Herald, drivers reportedly speed to make it in time before the closing of the Chirundu Border, which separates the two country.

They prefer sleeping after customs formalities on the Zimbabwean side of the border, before proceeding to the Zambian side when business opens the following morning.

Police say a total of 76 passengers were on-board, with some of them standing or sitting in the aisle. Forty-three of them including the driver, died on the spot, with at least 31 others left with varying degrees of injuries. 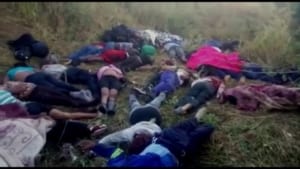 The bodies of the deceased were taken to Chinhoyi Provincial Hospital mortuary for post-mortem, while five of the critically injured persons have since been transferred to the capital Harare for further management.

Meanwhile Zimbabwean President Robert Mugabe has issued a statement expressing his condolence to the victims and families affected by the tragic accident.

“The nation mourns with the families of the deceased and extends its prayers for the speedy recovery of those injured in this bus disaster.

“On behalf of the Government and the people of Zimbabwe, my family and indeed on my own behalf, I wish to extend my sincere condolences to the affected families on the loss of their beloved ones.

“May they derive comfort from the knowledge that the entire nation bereaves with them during this, their darkest hour of grief. May the dear souls of those lost in this terrible tragedy rest in eternal peace,” Mugabe said.

In April, 28 people were killed, many burnt beyond recognition when a South Africa bound Proliner bus was sideswiped by a haulage truck along the Harare-Masvingo Beitbridge highway.