Five amputee children with albinism from Tanzania, who are survivors of ritual attacks, have received free prosthetics from Shriners Hospital for Children in Philadelphia, United States.

The five, aged 7, 14, 15 and 16 (two of them are twins), returned home in June after their week-long trip to the U.S., where they had gone for specialized treatment after they lost their fingers, limbs, and teeth in ritual attacks, according to AOL.

Their travel and accommodation expenses were covered by the Global Medical Relief Fund, a New York-based charity organization that helps children who have been injured in conflict or natural disasters.

“When they come here, they have lost so much. They have lost part of their youth and part of their dignity. We put them together,” said Elissa Montanti, founder of the Fund, and who also housed them in New York City for the entire week.

For many years, Tanzania has been cited as the largest “black market” for albino body parts in sub-Saharan Africa, with sellers coming from as far as Zambia, Malawi and Mozambique.

Some people believe that albino body parts can be used by traditional healers and witchdoctors to bring good luck and fortune.

Consequently, the demand for albino body parts in Tanzania and the neighboring countries has grown exponentially over the years, leading to an unprecedented surge in ritual killings in the region.

These attacks have forced many people with albinism to flee their homes, with some children being forced to stay out of school for fear of being attacked. Unfortunately, some of the attackers are well-known friends, neighbors and family members. 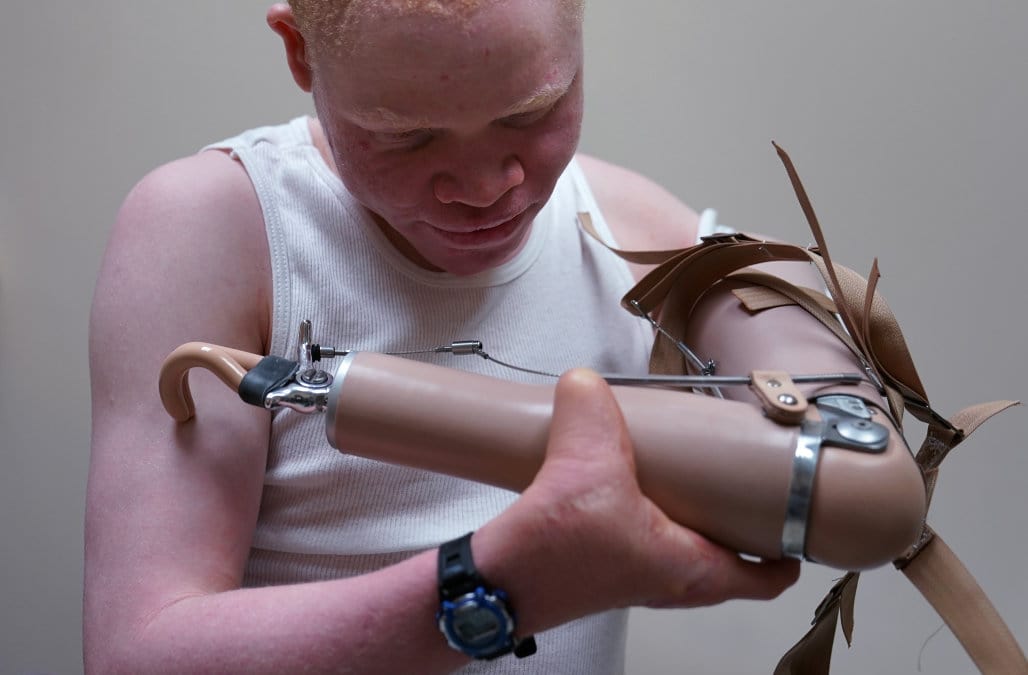 Emmanuel Rutema, a Tanzanian with Albinism who had his arm chopped off in a superstition-driven attack, tries to put on a new prosthetic arm at the Shriners Hospital in Philadelphia, U.S. Photo credit: AOL

Six-year-old Baraka Cosmas Rusambo, one of the five children, was the most recent victim of the notorious ritual attacks. He lost his right hand on March 7 this year in a witchcraft-related attack, according to Silive.

Emmanuel Festo, 16, whose passion is drawing, also survived a machete attack when he was seven. His left arm was hacked off above the elbow and his right hand fingers were chopped off.

Another survivor, 12-year-old Mwigulu Matonange, was attacked in 2013, where his left arm was chopped off above the elbow.

These heinous attacks continue in the face of stern measures and policies that have been put in place by the Tanzanian government to curb the vice.

Currently in Tanzania, witchcraft is a criminal offense punishable by death.