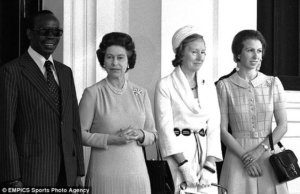 In 1979, Queen Elizabeth and her family visited Botswana shortly while on her way to Zambia for the Commonwealth Conference. As head of the Commonwealth, it was important that the Queen be present at that meeting especially at a time when several African countries had gained independence from the British. The Queen was received and hosted by His Excellency, President Seretse Khama, who was of royal status and married to Ruth Khama, an English woman. Her visit was during the annual Gaborone Trade Fair which the Queen witnessed before leaving for Zambia.