African rhinoceros are commonly referred to as black rhinoceros, even though they are usually grey, brown or white. 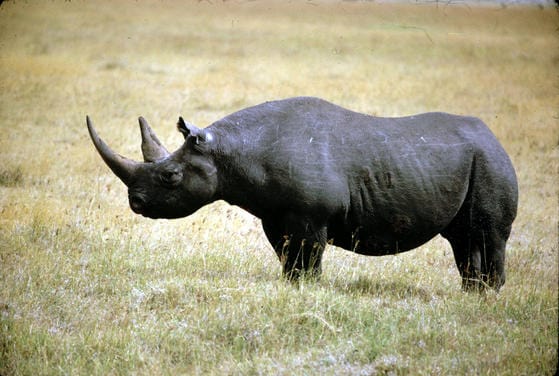 This unique animal is common to Kenya, Tanzania, Angola, Cameroon, Zimbabwe and Namibia. Its existence has been, and is still being threatened by the growing market for rhino horns in the Middle East and the rest of Asia, specifically China.

In China, rhinoceros horns are used to create special ceremonial hand daggers known as ‘Jambiyas,’ as well as a medicine, which is rumored to cure high fever, awaken comatose patients, and increase male sexual stamina. Interestingly, there has been no medical proof to support the use of rhino horns as a medicinal substance. Due to this, the increase in poaching, as well as the constant change in habitat of rhinos, has reduced the number of Black Rhinoceros by ninety six percent from 1970 to 1992. 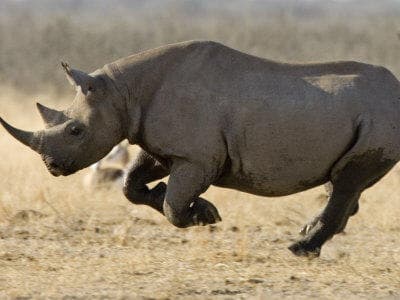 The black rhinoceros originally graced grasslands in large numbers in the late 1960s, reaching as much as seventy thousand in populations. However, the number has fallen drastically: it became a very miserable seventeen in 2004. As a result, these animals were placed under critical watch in 2006 for fear that they might go extinct.

An adult black rhinoceros can weigh up to 1,400kg and can grow as tall as 6 feet 7 inches, making it one of the biggest mammals in the animal kingdom. black rhinos can be extremely aggressive and are known to attack because of fear, confusion and — an unmerciful feature from nature — poor eyesight. Because of this poor eyesight, rhinos communicate through scent marking, which involves sniffing unfamiliar territory and defecation. They have a truly excellent sense of smell, which allows them to make sense of their environment.

Because of their size, weight and aggression, the black rhino has no predator, but will occasionally fall prey to crocodiles. They are herbivores and eat mostly shoots, roots, green plants and fruits. They can feed on almost 220 species of plants and tend to graze from plain to plain due to their territorial behavior.

Male and female rhinoceros differ in their grazing and social behavior. The females are usually smaller than the males and are more sociable, moving in packs along with their calves.

The black rhino is undoubtedly one of the most incredible animals of the African continent, join in protecting them by learning about them, going to visit them in the wild, and making donations for their preservatio. Here’s to the African black rhinoceros!