Probably his last match for the national team, Liberian president and former footballer surprised his supporters when he played in a specially arranged international friendly against Nigeria in Monrovia to retire his number 14 jersey.

51-year-old Weah wore the number 14 jersey and led the Lone Star onto the field for the first time in 16 years after his last international appearance. He played for 79 minutes before he was substituted, a perfect moment for a standing ovation at the Samuel Kanyon Doe Stadium. 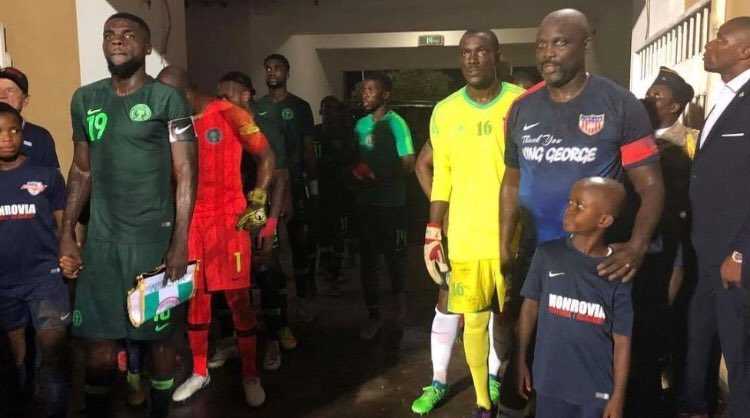 Weah was the first and only African footballer to win the Fifa World Player of the Year award in 1995. Despite age and weight, he has proved his worth as a world-class footballer.

The Liberia team suffered a 2-1 home defeat by a strong Nigerian side that included Leicester’s Wilfred Ndidi and Kelechi Iheanacho, Peter Etebo of Stoke City, Simeon Nwankwo and Henry Onyekuru of Galatasaray.

Onyekuru scored the first goal and Nwankwo headed Nigeria into a 2-0 lead. Liberia scored their lone goal in a penalty scored by Kpah Sherman.

George Weah had a successful career as a footballer which started from his country before moving to Europe where he played for Monaco, Paris Saint-Germain, Milan, Chelsea and Marseille among others before his retirement in 2003. Besides playing for the Liberian national team, he coached and funded it on various occasions.

He has won several international and continental awards including the African Footballer of the Year Award on multiple times. He is also the only African footballer to have won both Fifa World Player of the Year and the Ballon d’Or.

Weah went into active politics as a candidate in the 2005 presidential election which he lost to Ellen Johnson Sirleaf in the second round of voting. In 2011, he joined the race again as a vice-presidential candidate on the ticket of Winston Tubman but failed. Weah was later elected as a Senator in 2014.

He later won a landslide election runoff win in December 2017 and was sworn in as president in January.