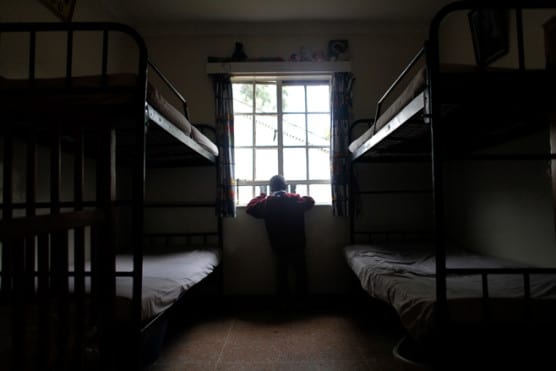 NAIROBI,KENYA,MARCH.9,2010-A child looks through a bedroom window at Nyumbani, an orphanage for abandoned HIV+ children in Nairobi, Kenya. The orphanage provides pain relief and palliative care when children are dying. Photo by Brent Foster

At 12 years of age, James deserves happiness, he deserves love, and he deserves education just like his age mates, and he is just beginning to become aware of himself.

At his age, many changes are happening to his body: yes, he is growing hair on his groin and armpits and his voice is becoming deeper. And, indeed, he should be feeling like a man now.

But he does not.

SEE ALSO: With African Women & Hair, We Prove We Are Still Colonized

His body is just but a shame: His thinness is a sight to behold and he would hide his whole face if it were possible, because he is tired of the long stares and how people look at him sympathetically and shake their heads.

And he cannot take it any longer.

He has been on medication for as long as he can recall and been hospitalized enough to last two lifetimes.

James has taken drugs to treat all sorts of infections, ranging from pneumonia and tuberculosis  to diarrhea, just to mention a few, and takes his drugs knowing full well that his survival is pegged on them.

He can never look at himself in the mirror — he is so emaciated — and with a recent bout of flaky dermatitis, he hates what he has become these days. Slowly it dawns on him that this entire time he has been fighting a losing battle; now the virus is winning and quickly doing so.

His will to live has left him. He would fight but his pain has become more than physical.

He has odynophagia, probably due to the oral thrush. He has chest pain. He has pain here and there, but his other pain, the psychological pain, is the greatest.

James is in the ward again, on treatment, but he knows his disease can’t be cured. He is one among many who are going through a similar situation.

Most will make it in to teenage years, but very few survive beyond those years.

Because at that age, many things begin to occur: They are attracted to the opposite sex, but with their physical appearance, they feel unfit. Most believe that they will never belong in a world where people are branded the same way property is branded.

We all ask whose sin is it that these children should suffer as a consequence. The government has been faithful. Our sick have been getting their ARVS, counseling, and nutritional support. The care providers have ensured that the patients comply with the treatment, the doctors too.

While all that is expected is being done, I want to remind us that AIDS is still a major problem in this part of the world. I want us to never forget that it has claimed millions of lives and it is not about to stop killing our loved ones.

While we are optimistic that we will win this fight through abstinence, being faithful, and using condoms, let us remember that there is a group that is vulnerable and continue to suffer the brunt of AIDS: our children.

I believe that every child has the right to health. Mother-to-child transmission has greatly decreased over the past years, but we are still far away from zero transmissions. So for many years to come, the pediatric wards will still be full of children who are immune-suppressed, children suffering from a totally preventable but dismal condition, children whose course in life is different, children who will come in to this world briefly and go out as fast as they came after a great deal of suffering.

So we have all failed.

Our mothers — shy from hospitals — carry babies for nine months and deliver at home without ever going to the antenatal clinics.

But why, Mothers? Why do you do this when you could learn your status early enough and save your unborn child? Why do you assume and then learn about your infection later when the child is already infected when nothing can be done?

Do you ever ask yourselves why?

Maybe our women are guilty, but let us remember those Mothers are often victims too, because they are too poor and cannot afford a television and therefore don’t have access to important information.

This is why we need to tell everyone about the prevention of Mother-to-child transmission so that we may grow a healthy population with a promising future.