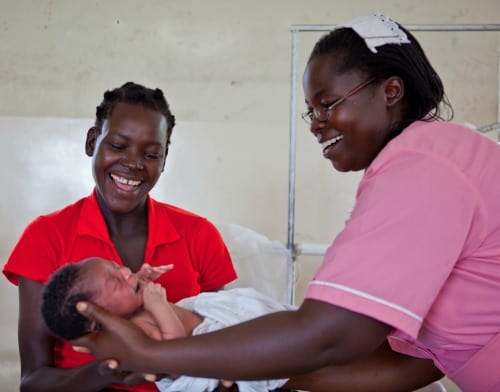 While Esther Madudu (pictured) no longer has to deliver babies with a cell phone light held in her mouth, her fairly new solar-powered suitcase is just one of many much-needed improvements that she needs at Tiriri Health Center IV in Katine District, Uganda as a midwife.

Serving more than 2,000 Mothers at her facility annually, Esther is a force in her community — and 12 other districts too.

As a midwife, Esther used to work around the clock with only one other midwife to assist her: Rising each day between 5 and 5:30, Esther would barely have enough time for taking a shower and rushing off to work roughly 16 hours a day.

At the center, Esther, who now has three other midwives to assist her rather than the one she depended on for most of the 11 years she has delivered babies, is a HIV/AIDS counselor, family planner, pre- and- post-delivery health care provider, and of course deliverer.

SEE ALSO: Why Every Man Needs To Examine His Testicles

“First, I check the babies, checking their cords and seeing if they passed stool and urine,” Esther told Face2Face Africa. “We review the Mothers who are sick. After that, it is antenatal care. You do all of that in a short time, touching each one as you go. There’s a lot packed in to antenatal: you have to do family planning [for couples], screening, pre- and- post-counseling, testing the couples for HIV/AIDS. And when you get those one or two Mothers who have HIV, you have to begin afresh. But while you are tending to that one, then you have another one who is in labor.”

Next to losing a Mother and/or child, delivering the news to a couple that one has HIV is one of the worst jobs, “A man can tell you, ‘Nurse, that is your woman…where she got her HIV, I don’t know. I’m walking away.’ He can leave you with the  Mother. Even if you try, he will go away. You have to handle the Mother, talk with her. So it’s stressful. But then they can call  you that they have brought another woman who is in labor. You have to leave this one, go and check the woman they’ve brought from the village. If she’s ruptured any membranes, then you have to start taking care of that delivery. And then after the cleaning, you come back [to the woman you were counseling]. So you find that you are working 24/7.”

For Esther, being a midwife is close to her heart: she grew up seeing women “with big bellies” coming to her grandmother’s house at all hours of the day. Seeing the women with the seemingly inexplicably swollen abdomens intrigued her so much that one day her grandmother allowed her to witness what comes out of the bellies.

“My grandmother, who is still alive, was a traditional birth attendant, and I saw women coming to her house with big stomachs,  and I became inquisitive to find out why their stomachs were so big. What they ate! Finally, one day she allowed me to see what was coming out of the big stomach. So I witnessed the delivery in her room in her house.”

From that birth, Esther was hooked, “I asked her who taught her how to do this, and she said, “No, for me, I’m using the natural knowledge, but for you, you have to go to school.”

And that’s exactly what Esther did.

Esther was fortunate enough to go to general nursing school for three years and then midwifery school for nearly another two.

And while she is professionally trained, the conditions by which she is forced to make sure Mothers don’t lose their lives while bringing forth life is beyond challenging due to the damage done by the Lord Resistance Army (LRA), who are insurgents that wage vicious attacks against civilians in northern Uganda by cutting off lips, noses, ears and hands.

“[In 1993,] the LRA rebels invaded, so they destroyed all of the electric wires and poles. So there is no electricity in the facility. There is no running tap water. Actually, infrastructure is so poor.”

Undeterred, though, Esther is committed to her mothers. With the next health facility, Soroti Hospital, being almost 20 miles away, Esther knows that she is often the only barrier keeping both Mother and child from death.

At a New York donor event in April, Esther delineated the plight of many African women, “The cliché of an African woman delivering children easily is a lie. Near to half of all African women give birth alone, without aid and without care.  They risk their lives giving birth. This number can reach up to 95 percent in South Sudan, a country beside mine, with one of the highest rates of maternal mortality in the world.

“Indeed, almost 200,000 of our women, sisters and mothers die during pregnancy or childbirth each year. And these are unfair and needless deaths –because they are due to lack of primary care and could easily be prevented!”

Esther’s passion and willingness to keep fine-tuning her skills is the reason Amref Health Africa, a health-development organization “run by Africans, for Africans,” chose her as the face of their “Stand Up for African Mothers” campaign back in 2011.

“Together with [Uganda’s] Ministry of Health, Amref Health Africa was delivering training programs in the vicinity of Esther’s health facility, in which she had participated, and were monitoring and supervising Esther. She was able to show the Amref Health Africa staff all around her facility every time they visited and give them thorough tours and explanations about all aspects of her work and facility.  They were very impressed with Esther,” Senior Manager, Communications & Advocacy Sharon Rainey says.

And indeed, Esther understands — and can articulate — the needs and challenges of the African family…and the African midwife.

Running a facility with three midwives instead of seven or eight to attend to 100 beds on a daily basis, staffing appears to be one of Esther’s most-obvious challenges.

But becoming a midwife isn’t an easy road, “Training to become a midwife is not very simple, because it is expensive. And you know the poverty of Africa, most of the parents can’t afford the tuition. So girls can want to do midwifery, but you find the cost is too high for a parent to afford. So you’ll find her doing another course that she is not interested in. Women come to a health facility after getting that Amref training and they see Esther and now there is awareness in the importance of midwives.

“[After] Amref invited the Minister of Health to my health facility, it has inspired many, many girls and others to think, ‘I should become a midwife. I should be like Esther. I want to be like Esther.’ Only that they cannot afford, but now they are focusing on that. They want to do the midwifery courses.”

Esther adds, “Africa needs African mothers, African mothers need African midwives. We believe in a future where African women have access to quality health care during pregnancy and childbirth. We want to give African babies a chance at life [by keeping their mothers alive].”

When a Mother dies, it creates havoc not only for her family but also for her community. Esther explains, “Maternal death dooms not only children deprived of their mothers but also the whole continent. In our African countries, Mothers are the heart of our communities. They are a source of life, water, education, income, and health care for the whole of their families and the entire community.”

Esther adds, “Maternal mortality creates many, many orphans, who often end up on the street. This year again, in our countries in Africa, 1 million children are going to lose their mothers.”

Ultimately, Amref is lobbying for Esther to become a Nobel Peace Prize candidate for 2015 in order to bring awareness to the plight of African Mothers…and their midwives, “[We want to] nominate Esther Madudu as a candidate for the 2015 Nobel Peace Prize representing all African midwives to draw global attention to the high maternal mortality rates in Africa and the importance of midwives in reducing this.”

If you would like to support Esther and the important work she — and other midwives across the continent — are doing, sign Amref’s petition  to get her nominated for the Nobel Peace Prize, because like Esther says, “Midwives save lives. And we need the world to know it.”