Commonly referred to as the “Pompeii of Africa”, the Timgad Roman Ruins site is one of the most important ancient sites in Algeria, and indeed the whole world, as it presents a real-life account of the existence of Romans in the region.

The site, which spreads its spectacular ruins across the Aures Mountain, is already listed as a World Heritage Site by UNESCO, and remains a fascinating spot for historians and explorers. A lot of stories have been told about how the ruins came to be.

Even so, the site, which is estimated to have been built in the second century AD, comprises of some miscellanies that cannot be found anywhere else in the world. It is one of the most visited tourist attraction sites in Algeria.

Apart from the seventh century Basilica, all other ruins at the site were constructed in the second century AD. Their excavation started from 1881 to 1959 and has so far led to the discovery of many unique fossils, including the triumphal arch known as the Arch of Trajan. 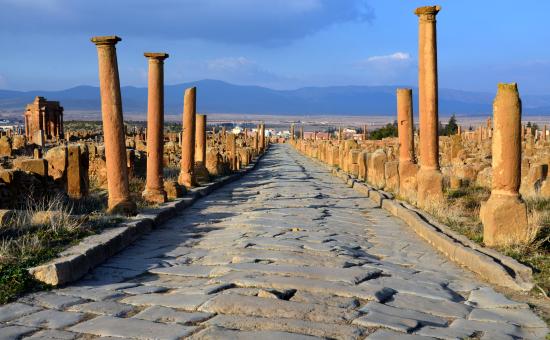 The Arch comprises of a forum, library, baths and several private houses, all of which are remarkably designed with identical dimensions. There is also an timeless Latin graffiti, with a lettering error, engraved into the concrete steps surrounding the Forum square.

The inscription reads: “To hunt, bathe, play, to laugh. That is life!” Many scholars find the blatant typographical error in the graffiti amusing as it reveals the romantic life and carefree aspirations of the author.

At the heart of the Roman city is a playground for the city’s youth and further down the street is an open-air market, with fixed shops on each side. One of the shops bears graffiti of vine branches, indicating the presence of a local bar.

In 100 AD, the Roman Emperor established several military barracks on the city’s Roman road. Interestingly, the ruins of the barracks still exist at the site, pointing to the presence of highly advanced urban planners during the early Roman civilization.

The site also has cemeteries, public toilets, sewers and a high-tech water supply system made of baked clay pipes. Historians claim that ancient Romans loved steam baths. This claim is well supported by the presence of 14 spas at the Timgad Roman Ruins.

At the entrance, there is the city’s museum where the sophisticated mosaic floors of the saunas used by the city dwellers are displayed. The floors were discovered in their mint condition a few decades ago, bearing testimony to the luxurious lifestyle of the ancient Romans.

The massive historic site is a perfect spot for people who want to learn a thing or two about the Roman history.