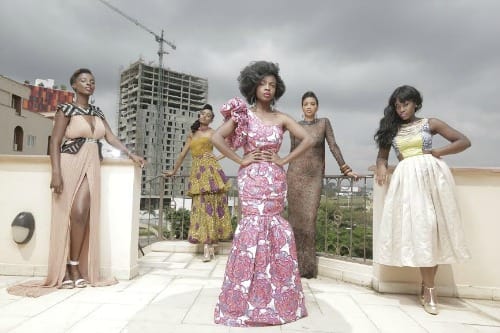 What is the African story of the returnee? Is it sexy? Is it stylish? Is it success driven? You bet it is, and new Internet series “An African City,“ which is described as the “Sex and the City” of Africa  reveals this and more.

“An African City” follows the exploits of five young women who return to their home country of Ghana in search of a new life and love. The series was written by Nicole Amarteifio who admits the inspiration was from “Sex and the City” but tells its own unique story. The web series promotes everything that is right with a New Africa: it is progressive, sexy, and loaded with opportunity.

Already in its eighth episode, an “African City” is the web series sensation to watch. But what exactly may be attracting a large audience to this web series? Could it be the gorgeous garments and a good-looking cast or the message?

Face2face Africa went face to face with Millie Monyo, executive producer of the show, to find out why the series is such a hit with modern women, its implication on Africa, the story behind it, and the way forward.

Face2Face Africa: Your recent web-series is doing very well. Tell me how you feel about this and why you decided to invest in this project?

Millie Monyo: I am tremendously happy and proud of how well the webseries is doing. Upon meeting Nicole Amarteifio, the creator of the series, and hearing her idea, I just knew it would be a hit and wanted to be involved. I decided to invest my time for that simple reason.

F2F Africa: As an executive producer, what drew you to this particular storyline?

MM: I was tired of the imagery that kept circulating from decade to decade about the African continent. I love the fact that “An African City” is the returnee story. When I started my own business, MiMo Designs, I always had a thought in the back of my mind to return to Ghana and wondered how I’d be received and if I would be successful there. Even though Accra was my second home, I wondered if I would be a fish out of water. A lot of people are returning. It’s our story, and it needs to be told.

F2F Africa: I have seen a couple of episodes and the show is beautifully staged and written. For the benefit of those who are yet to see this web-series, tell us about it?

MM: “An African City” tells the story of five beautiful, successful, and determined African females who return to their home continent in search of the life and love they’ve always longed for. The show delves in to the lives of these women as they struggle to find new ways to deal with being modern and successful while not falling victim to the pressures put on them by their traditional African parents.

Watch the first episode of “An African City” here:

MM: “Nana Yaa,” a Ghanaian who was raised in New York state, just outside New York City. She returned to Ghana after earning her first degree at Georgetown University and her graduate degree in journalism from Columbia University.

“Sade,” a Ghanaian-Nigerian raised in Texas, works as a marketing manager for a prominent Nigerian Bank based in Accra. She is a graduate of Harvard Business School and spent most of her young professional life between New York and Boston.

“Ngozi,” a Nigerian and the youngest of the five ladies, was raised in Maryland. After earning her graduate degree in international affairs, she was offered a job at a development agency in Accra. Much to the dismay of her friends, Ngozi is the religious one of the group.

“Makena” was born in Kenya, but spent most of her life in London. She is from a biracial family, with a Ghanaian mother and a British father. In England, she graduated from Oxford Law and went on to have a successful career at a corporate law firm. After a divorce, however, she decided to return to the continent jobless.

“Zainab,” a Ghanaian born in Sierra Leone, grew up in Atlanta. Her entrepreneurial spirit brought her back to Ghana, and she has a constant eye for business opportunities.

Behind the scenes of “An African City”

Behind the scenes of “An African City”

F2F Africa: Which character do you relate to more? Do you see yourself in any of the characters as an African woman living in the diaspora?

I consider myself a mix of “Ngozi” and “Sade,” which is interesting because they are opposites.

F2F Africa: Did you have anything to do with the casting and what informed your decision to cast the main characters?

Nicole met Nana Mensah (“Sade”) when she was in boarding school in the United States. She met Esosa (“Ngozi”) and MaameYaa (“Nana Yaa”) during her N.Y. auditions for the pilot. This all preceded our joining forces professionally. When it came time to hold auditions in Ghana for two additional actresses. Marie (“Makena”) came to mind, whom I had worked with at Sparrow productions. Maame was a friend of Nicole’s. Upon meeting each girl individually, there was a feeling that the casting was just right. The final click happened during the table read for Season 1. As we read though the scripts, something magical happened and I just knew this was it! We had our girls!

F2F Africa: I noticed some known faces and some unknown faces in the web series. How did you go about casting for the web series? How many actors did you see in total before you made your final call back?

Nicole had an audition in New York for the pilot episode, and we held an audition in Ghana. We saw everyone who came in and decided that very day if they were a fit for our show or not.  If we did not have a particular role for them, we hung on to their file to use when we needed extras. We are always taking submissions. Actors should feel free to reach out on our show website.

F2F Africa: Did you face any challenges?

MM: We haven’t faced any challenges that every other production team trying to make a quality show faces. I hope that after this season it will be much easier to raise money and acquire locations, get clothes, sponsors, and support.

F2F Africa: The web series was beautifully shot, especially the location shots. What camera did you use?

F2F Africa: How long did it take to shoot and edit the show?

MM: It took one month to shoot Season 1. The editing process is continuous.

F2F Africa: Are you considering bringing the web series to TV? Why did you choose the Internet over TV?

MM: When I teamed up with Nicole as her business partner, I told her my goal was to bring this series to TV. That still remains my ultimate goal. However, it was so smart  of her to remain adamant about our initial introduction as a webseries. She was inspired by Issa Rae who launched “Misadventures of An Awkward Black Girl” a couple of years ago to much fan fare. Our show has been viewed in the U.S., U.K., Ghana, France, Italy, Ethiopia, South Africa, Nigeria, and the list goes on and on.

F2F Africa: The series has been constantly called the “Sex and the City” of Africa. Are you in any way flattered by this comparison?

MM: Absolutely flattered! “Sex and the City” is still my favorite show. I love how open and honest it was, and how I was able to connect to the characters. Even though I was just getting in to college when it was popular, I could still relate and even remember saying to myself, Wow those are some cool 30 something women! To now see our own version of it with my own African sisters and with an African twist is an absolute pleasure!

F2F Africa: Do you see a future in web series? For example, do see people crossing from TV to the Internet in the future?

MM: Definitely! I never watched shows online, but when I returned to Ghana a few years ago, I found that I missed being able to see my normal shows. I made some friends in Ghana who would put movies and shows on my computer, and I became addicted. So much so that when I got back to N.Y., I immediately signed up for a Netflix subscription and have now discovered the marathon style of watching entire show seasons online. I’m late to the webseries game, but I think it’s here to stay for sure.

F2F Africa: What do you think is causing this crossover?

MM: I think people want to be able to consume content on their own terms in their own time. There aren’t many shows that I watch in real time anymore.

F2F Africa: Are we going to see any surprises in the web series? What should we expect?

MM: Keep watching. Episode 9 and 10 are great, and of course we leave with a cliffhanger that will have you wanting more.

F2F Africa: What exactly do you hope to achieve with this web series?

MM: Our hope is that the show will connect women across Africa and beyond via the things that we all share in common, which is wanting to find love and be loved. I hope that some of the topics spark conversations, and lastly, I hope that the series continues to entertain. At the end of the day, it’s just a show for people to enjoy and have a laugh.