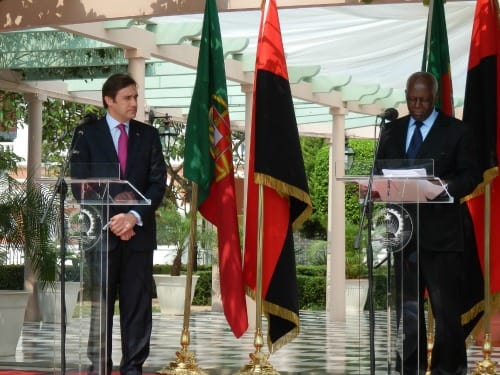 Angola was once colonized and occupied by Portugal for a period of 400 years, only gaining its independence in 1975. A brutal civil war ensued, which just ended in 2002. In its wake, the oil- and- mineral-rich African nation has seen its economic fortunes expand while its former colonizer struggles with crippling poverty and other related after-effects. The Guardian recently published a brief investigative report on the economic role reversal between the two nations.

Portugal and Angola forged what the paper alleges what may have become a reluctant partnership in 2011, when Portuguese premier Pedro Passos Coelho (pictured left) and current President of Angola José Eduardo dos Santos (pictured) established a financial deal. Angola’s fortunes were certainly in better shape than Portugal, even though the nation has been dogged with allegations of corruption and government mismanagement.

There was no doubt about the firm handshake, but the smile looked a bit forced. The date was 17 November 2011, the place Luanda. Pedro Passos Coelho, the Portuguese premier, had just completed talks with the president of Angola, José Eduardo dos Santos, sealing an agreement that was both a boon for Portugal and deeply humiliating.

Prior to the agreement between Coelho and President Dos Santos, Portugal received a $100 billion bailout from the European Union (EU) and the International Monetary Fund (IMF). The terms of the bailout meant that the country needed to resort to “radical austerity measures,” which siphoned money from the general population and exhausted welfare.

During this period, Angola’s rise as an economic power was underway.

Dos Santos has been in power since 1979 and the country now enjoys growth rates of between 5% and 15%. Portugal, heavily in debt and struggling to climb out of recession, finally exited its bailout last month.”Maybe Angola will colonise us now,” says Vasco Lourenço, the head of Associação 25 de Abril, an organisation that is trying to preserve the spirit of the 1974 revolution.

And just last month, Portugal paid the EU and IMF bailout funds despite staggering unemployment and other issues.

The conflict has moved to another front, all about the economy, and Angola seems to have gained the upper hand. “Angola is looking for recognition and makes it very clear where the money is, sometimes to the point of humiliation,” says French historian Yves Léonard. In February, when the cash-strapped government in Lisbon raised the possibility of selling 85 Miró paintings, an Angolan millionaire, Rui Costa Reis, offered to buy them. Well-off Angolan families are now the only people who can afford to shop on the capital’s upmarket Avenida da Liberdade. They are investing in luxury apartments at Cascais, a fashionable seaside resort, and buying up companies hastily privatised by the authorities. They – and the Chinese – are the prime beneficiaries of the “golden visas” that the government has promised to anyone investing €500,000 ($650,000) in the country.

Read the rest from the Guardian Weekly here.