According to recent data from the Organization for Economic Cooperation and Development (OECD), South Africans are among the most hardworking people in the world. 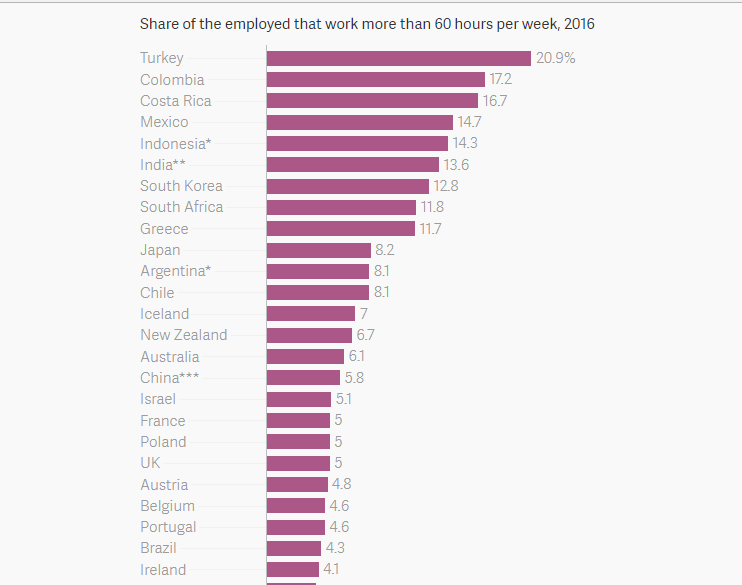 In a sample of countries analyzed by the organization, the country ranked fifth among the hardest working countries. The organization measured hard work by the number of hours worked by individuals in the formal sector in each country. In a country with unemployment hovering close to 30%, this data sheds a different light on life and work in the country. 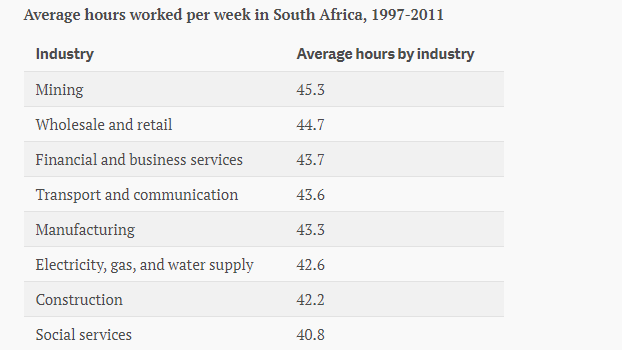 According to a study from Stellenbosch University’s Bureau for Economic Research, South Africa’s hardest workers are black men younger than 45 who have permanent jobs in a semi-skilled occupation.

The number of formal employees who work more than 40 hours a week is also increasing, as is the number of hours worked in the public and private sector.

But South African women who are more educated and work in the professional sector are likely to work shorter hours though those who work in the informal sector – agriculture, domestic work and other low-income jobs – which were excluded from the OECD and Bosch studies work longer hours.

In fact, Statistics South Africa’s latest study released in 2000 found that women spend 23% of their day working, as opposed to men at 19%. South African women without a housekeeper also spend 183 minutes per day on housework, as opposed to 75 minutes for men. Those living with children spend an average of 87 minutes per day taking care of them, compared to men, who spend 7 minutes.

But income inequality and race factor greatly into these realities. Falling on either extremes of the wealth spectrum affects the number of hours worked.  Those in the economic capitals of the country, Gauteng province and the Western Cape, where highly skilled workers are more concentrated work less, and so does the country’s more impoverished areas such as the Eastern Cape where fewer people have permanent employment.