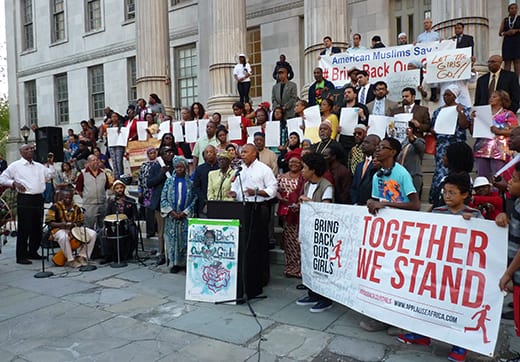 “Together we hope to make a difference in the community by bringing awareness and hope for a brighter future. We pray for the girls and condemn the activities of Boko Haram and demand the girls’ immediate release,” Ikotun said.

“Bring back our girls!” Adams exclaimed as he acknowledged the horrific global enslavement of girls and women. “The maltreatment is not just a Nigerian problem, but a worldwide problem, a crime against humanity.”

Throughout Nigeria and across the world, support has poured out for the roughly 300 Nigerian schoolgirls who were violently abducted from their dormitories by the Islamic extremist terrorist group Boko Haram. First Lady Michelle Obama recently shared her remarks, asking that the nation “pray for their safe return” and “continue fighting for our girls.”

The global hashtag #BringBackOurGirlsBack is being used around the world as an anthem, unifying various people and touching all faiths for a common cause to garner universal support and resources to help bring the missing girls home safely.

From the beginning, Boko Haram has been extreme, targeting Christians, bombing public spaces, beheading civilians, and razing entire communities. With the news that Boko Haram is threatening to sell the girls in to slavery, Ikotun pleaded to those in attendance to assist with any resources to help the movement and get the girls home. Ikotun added that Applause Africa Magazine is a voice for Africa by Africans but “tonight’s story is a sad story but a story we unfortunately have to tell.”

Imam Talib Abdur-Rashid of the Mosque of Islamic Brotherhood in Harlem, a religious organization representing 40 mosques across the United States stated, “As various groups converge across the world, condemning the abduction and asking for methods to stop Islamic extremists, we must be careful not to hate all Muslims. The extremists of Islam are our common enemy.  A crime perpetrated against religion is the greatest crime against religion. Let’s stand with unity and vigilance against threats and thugs who only have hate on their minds. We need more action right now.

“Terror has no religion, no ethnicity. Extremists are the followers of the devil.”

A Nigerian executive from the organization NADO stated, “If my daughters can’t sleep, I can’t sleep.” Directing her message at the Nigerian government, she demanded, “ Stand up and deliver your promise to “find Boko Haram in the bushes where they hide.” She added, “This is the same mafia and government that are stealing our money. If it was your daughters, they would be home by now. As long as the girls don’t sleep, we don’t sleep. There is nothing to celebrate!”