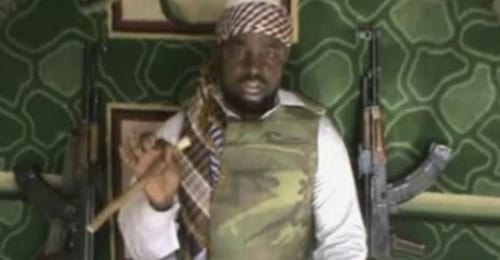 On Monday, Boko Haram leader, Abubakar Shekau (pictured), not only claimed responsibility for the abduction of girls who attended Government Secondary School in Chibok, Borno State, Nigeria, but he also brazenly threatened to sell them to the “marketplace,” according to the Associated Press.

Reportedly beginning with a number of Boko Haram shooters releasing bullets from rifles and shouting, “Allahu akbar (God is great),” the hour-long video featured Shekau allegedly saying, “I abducted your girls. By Allah, I will sell them in the marketplace.”

An unnamed intermediary claims that Boko Haram now wants to negotiate ransoms for the girls, which are numbered at 267, according to the AP.

In addition, the intermediary says that some of the girls are ill, while others have reportedly died of snake bites.

“An intermediary who has said Boko Haram is ready to negotiate ransoms for the girls also said two of the girls have died of snakebite and about 20 are ill. He said Christians among the girls have been forced to convert to Islam. The man, an Islamic scholar, spoke on condition of anonymity because his position is sensitive.

Meanwhile, with each day that passes, the Nigerian government appears increasingly incompetent and/or negligent in securing the students.

On Sunday, Nigeria’s First Lady, Patience Jonathan, reportedly added to negative perceptions when she allegedly ordered the arrest of two leaders of protests over the weekend. And to add insult to injury, Jonathan, according to those arrested, questioned the validity of the abduction, while accusing the protestors of belonging to Boko Haram, which infamously means “Western education is sinful.”

As the news broke about the First Lady’s dubious stance, her office swiftly denied the reports, but Saratu Angus Ndirpaya and Naomi Mutah Nyadar reportedly told a different tale, claiming that they were taken to a police station for their protests. According to Ndirpaya, while she was soon released, fellow leader Nyadar remains imprisoned.

It will be three weeks tomorrow since more than 200 teen girls were abducted from their school. More recent reports indicate that not all of the students were enrolled at GSS due to testing that caused other students from surrounding schools to go to the school for the exams.

Nigerian President Goodluck Jonathan has been harshly criticized for his perceived negligence of the issue, spurring desperate parents and concerned citizens to take retrieving their daughters in to their own hands. When that wasn’t fruitful, though, due to a lack of state and federal support, they protested with a number of marches that were picked up by online media and social media, spurring protests around the world over the weekend.