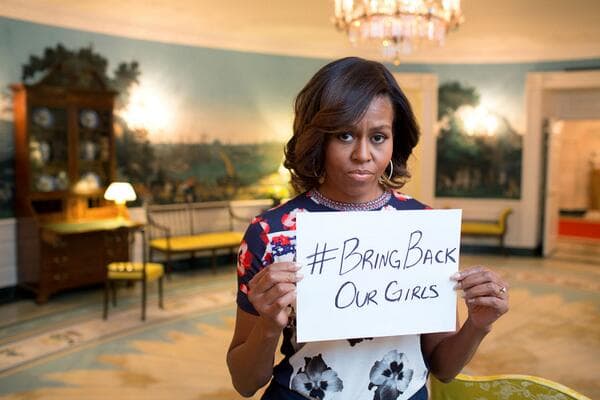 Using on of her husband’s, President Barack Obama, platforms as another opportunity to underscore what’s dear to her heart, U.S. First Lady Michelle Obama championed the cause of the missing girls of Nigeria in a heartfelt video.

With Mother’s Day being on Sunday, May 11th, Mrs. Obama decided to use President Obama’s weekly address to not only wish Mothers a happy Mother’s Day, but bring greater awareness to the missing girls of Government Secondary School and Warabe:

“Like millions of people across the globe, my husband and I are outraged and heartbroken over the kidnapping of more than 200 girls from their school dormitory in the middle of the night.

“This unconscionable act was committed by a terrorist group determined to keep these girls from getting an education — grown men attempting to snuff out the aspirations of these young girls.

“And I want you to know that Barack has directed our government to do everything possible to support the Nigerian government’s efforts to find these girls and bring them home.”

The First Lady then went on to speak on why this issue is personal to both her and President Obama, “In these girls, Barack and I see our own daughters. We see their hopes and their dreams. We can only imagine the anguish their parents are feeling right now. Many of them may have been hesitant to send their daughters off to school, fearing harm might come their way.”

Further personalizing the missing girls’ challenges to obtaining an education, Mrs. Obama explains, “But they took that risk because they believed in their daughter’s promise and wanted to give them every opportunity to succeed. The girls, themselves, also knew full well the dangers they might encounter. Their school had recently been closed due to terrorist threats, but these girls still insisted on returning to take these exams.

“And what happened in Nigeria was not an isolated incident; it is a story we see every day as girls around the world risk their lives to pursue their ambitions.”

Mrs. Obama then highlighted the story of 16-year-old Pakistan journalist Malala Yousafzai who was shot in the head by the Taliban for writing about promoting girls’ education in her homeland and attending school.

“The courage and hope embodied by Malala and girls like her around the world should serve as a call to action, because right now, more than 65 million girls worldwide are not in school. Yet we know that girls who are educated make higher wages, lead healthier lives, and have healthier families. And when more girls attend secondary school, that boosts that country’s entire economy.

“So education is truly a girl’s best chance for a bright future. Not just for herself, but for her family and her nation. And that’s true, right here in the U.S. as well.”

On Wednesday evening, Mrs. Obama showed her support for the missing girls of Nigeria by tweeting a photo of herself with a placard that read, “#BringBackOurGirls.” The photo instantly went viral as the public retweeted on Twitter and shared her photo on Facebook.

Now the world eagerly waits to see if the girls of Chibok and Warabe can indeed be returned home.