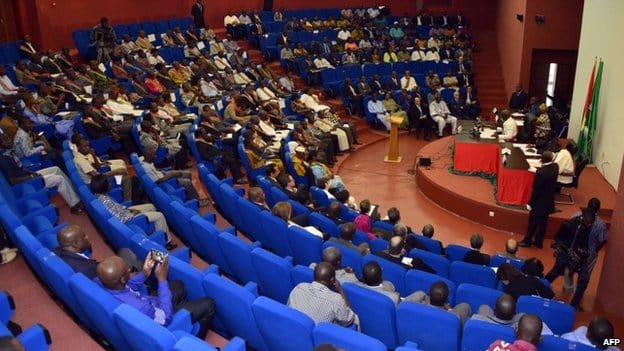 After the Members of Parliament’s salaries were recently revealed to the public, angry Burkina Fasoans took to social media to express their displeasure with the seemingly exorbitant amount. With the public pressure, now the MPs have agreed to cut their salaries in half, according to the BBC.

There are currently 90 members of Parliament who make up the temporary Transitional National Council (CNT, pictured), which was put in place after President Blaise Compaore was forced to step down.

This monthly salary, though, doesn’t include the attendance fees, office allowances, healthcare supplements, and fuel costs that each MP additionally receives.

Since former President Compaore was forced out of power by the people — after attempting to extend his term yet again after 27 years of rule — Burkina Fasoans are vociferously demanding accountable and fair leadership.

Consequently, when the MPs salaries became public and critics compared the figure to the regular Burkina Fasoan’s lifestyle, many saw the amounts as yet another abuse of power.

“Campaigners, including grassroots political movement Balai Citoyen, have said MPs should not be paid attendance fees and have pointed out the substantial gap between their salaries and average earnings.

“Another campaign group, the Coalition Against Costly Life, has said a maximum salary of $900 would be sufficient.”

With the interim government being aware of what the newly empowered public is capable of, the MPs have reportedly now agreed to cut their salaries in half, although they are yet to release an official statement on the matter.