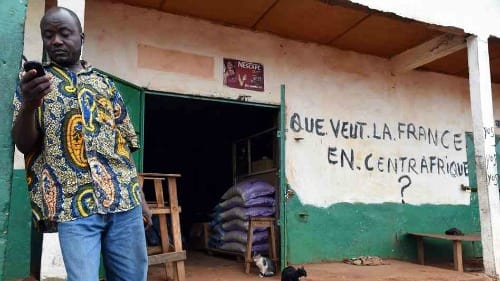 A Muslim shopkeeper uses a mobile phone in front of his shop in the PK5 district of Bangui, the capital of the Central African Republic, on April 30. The nation, which struggles with conflict between Christian and Muslim militias, banned texting on Monday.

The Central African Republic (CAR) is rife with turmoil. Thousands of people are dying from hunger, disease, and fighting between the countries’ Muslim and Christian populations. The landlocked nation is engaged in “the worst crisis most people have never heard of” according to Samantha Power, the U.S. Ambassador to the United Nations. Without the support of the international community, the government is struggling to find ways to curb the violence and establish peace in the country. The latest attempt at security bans the use of SMS texting across all mobile devices in the country.

Communications Minister Abdallah Assan Kadre said the suspension of SMS services was ordered by the nation’s prime minister, André Nzapayéké “in order to contribute to the restoration of security in the country.” According to Reuters, the service has been down since Monday.

The current texting ban was prompted by text messages sent by an organization called “Collectif Centrafique Debout,” which appeared to be organizing a general strike. Reuters reports that the SMS messages “urged people to stay at home until there is complete disarmament, especially of the PK5 Muslim area.” The ban is expected to be in effect for several days until tensions calm. 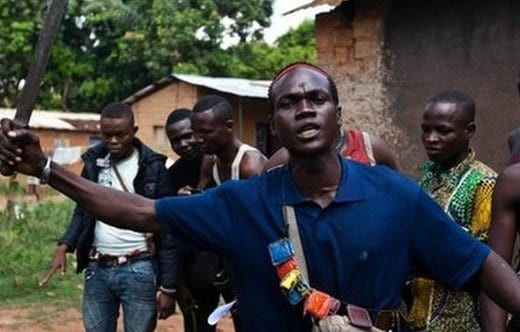 The ban on SMS speaks volumes about how even in the poorest countries, technology has become a key enabler in how people communicate and process conflict. Many in the villages surrounding Bangui, CAR’s capital, have first-generation smartphones filled with images of mutilated bodies and dying children. The government thinks the sharing of this content along with organized protest through SMS is only contributing to the spread of rumors and the building up of tensions.

Similar policies were enacted throughout the Arab Spring with economically advantaged nations banning Twitter, Facebook, and other online media in an effort to stunt people’s ability to organize and protest. The blocking was quickly circumvented by savvy hackers and technologists committed to forming alliances and the principals of free speech.

Whether the text ban will have any real impact on stemming the growing violence in CAR remains to be seen.