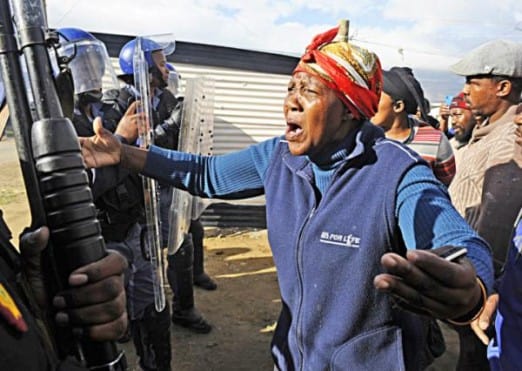 The recent forced evictions at the Lwandle informal settlement in Cape Town have revived painful memories of the past. More than 200 shacks were burned and demolished on Tuesday leaving desolate families homeless.

In the beginning stages of Apartheid, Sophiatown (pictured below), a famous Black suburb, was demolished at night without residents receiving a final warning as the bulldozers emerged. 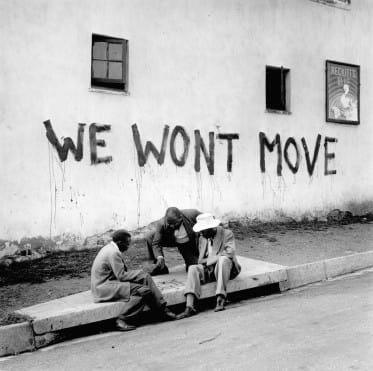 In Sophiatown the people said “We Won’t Move!.”…and when the police arrived that first day people banged and tapped with stones and iron bars against the lamposts, and Sophiatown echoed in defiance….
1955

The blame game among the Democratic Alliance (the official opposition,) the African National Congress (the ruling party) and the South African National Roads Agency (SANRAL) who own the land and were granted an eviction order earlier this year ensued, with each passing the buck like a casual smoke.

Consequently, the ANC blamed the eviction on the Cape Town Metro, which is under DA control. Spokesperson Zizi Kodwa went as far as to say that this was the DA’s way of punishing people for losing last month’s general elections. He concluded that this “is tantamount to undermining democracy and the freedom of choice by the DA Metro.”

The DA’s national spokeswoman, Phumzile van Damme, responded that the ANC’s remarks were “nothing short of cheap and petty politicking” and that they are “entirely disingenuous and in no way accurate.”

Dipuo Peters, a government official, said that the government had urged SANRAL to withdraw the eviction order and allow the residents to continue their residence in the short term while a long term solution is put together. She went on to say that they do not condone illegal occupation of land, and the residents will be allowed to stay on for six months.

Look at this whole mess: Africans scrounging in vain for African land while the sons and daughters of Europeans live in luxury, comfortably. Luxury that was attained at the expense of Black people.

The Economic Freedom Fighters’ spokesperson, Mbuyiseni Ndlozi, remarked, “It is no secret that South African cities, due to historic and continued problems of unemployment, poverty, and inequalities, have always been zones of exclusion for the poor and Black people in particular.”

“By SANRAL’s own admittance, the interdict being acted on at the moment was received ‘earlier this year.’ That they have forcefully removed the now-homeless people of Lwandle just yesterday, soon after the election, is a confirmation that the ruling party and the Democratic Alliance are in an anti-people alliance. For if it was genuine, it would have happened right then.”

The evicted are currently being held in a community hall. After Sunday, they will no longer be welcome there either.