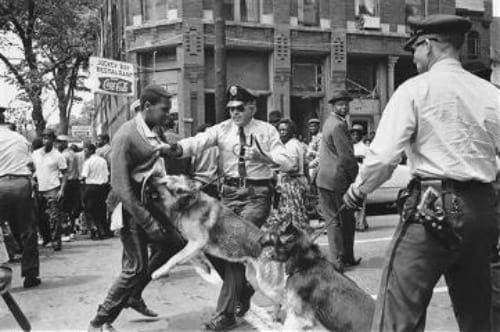 One of the most-stirring moments in the Civil Rights Movement of the 1960s occurred on this day in Birmingham, Ala. More than 1,000 students took to the streets to protest the segregation and racism present in the town by way of the Children’s Crusade, resulting in police chief Bull Connor unleashing dogs and fire hose attacks on the children.

Rev. James Bevel organized the march under leadership of Dr. Martin Luther King Jr., and the planned march was controversial because of the enlisting of minors. Bevel and King were hoping to drum up wider support for the Southern Christian Leadership Conference (SCLC), which seemed to be losing momentum in Birmingham. Bevel decided that using students was less of a risk because — unlike most adults — the children had less to lose.

It was reported that the then-Nation of Islam leader Malcolm X balked at the protest because of the risk to the students. King, himself, was also reportedly reluctant about the idea, but ultimately gave the project a green light. From there, the SCLC began canvassing and training students on the proper protocols of nonviolent protests.

The 1,000 African-American students walked out of their classrooms on May 2 and gathered at Sixth Street Baptist Church to proceed with their march. Police headed off the marchers and then arrested hundreds off them for truancy and public disturbance.

The next day, more students returned in protest, leading Connor to charge his officers and the fire department to use deadly force on the unarmed students.

Photographs of the students being beaten, attacked by police dogs, and blasted with water made its way around the world and sparked anger.

Later that day, Dr. King addressed the parents of the children who were arrested and beaten. In a speech delivered at the Sixteenth Street Baptist Church, King rallied parents around their children and applauded their bravery.

“Don’t worry about your children; they are going to be alright. Don’t hold them back if they want to go to jail, for they are not only doing a job for themselves, but for all of America and for all of mankind,” King said.

The Justice Department later got involved, urging the SCLC to end the protests and return the children to classrooms. The SCLC and local officials came to terms on May 10th, after the city said it would desegregate stores in the downtown area and release all the jailed protestors on the condition that the SCLC end their boycotts and unrest.

The Crusade may have had its critics, but without the images of violence from Connor’s forces spreading worldwide, the movement could have stalled greatly. President John F. Kennedy, appalled by the actions of Connor and similar acts, would be moved to pass the Civil Rights Act of 1964 as a result of what occurred that day.

The 51st anniversary of the Children’s Crusade will be recognized today in New York in a unique ceremony. Two women who marched in Birmingham will publicly thank the New York City Fire Officers Association, which released a resolution in 1963 criticizing the use of hoses by the Birmingham Fire Department.