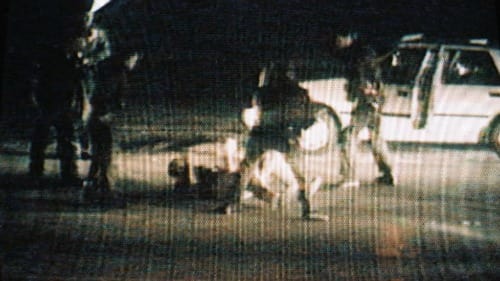 police officers in the brutal beating of Rodney King (pictured throughout). Consequently, the Los Angeles, California, riots began on this day in 1992 and raged on for six days while leaving the city in shambles.

The details leading up to the riots began on March 3, 1991, when King and two other passengers were flagged in a traffic stop by the Los Angeles Police Department. King sped off, leading to a high-speed pursuit and was cornered by the police. 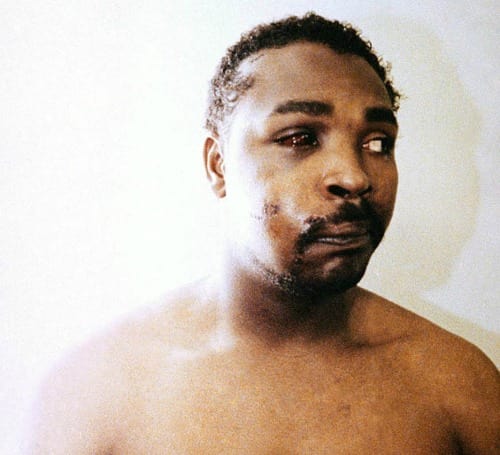 After leading King’s passengers to a patrol car, five of the cops attempted to arrest King and began savagely beating him. They claimed King was under the influence of PCP, which was later proven to be untrue.

George Holliday videotaped the entire violent ordeal on camcorder from his apartment window, which helped break the case open and highlight the instances of police brutality in the city. King later said in an interview the reason he didn’t stop for police was because he was on parole and knew a Driving Under the Influence arrest would have violated his parole.

By the time the police were done beating him, King had a broken cheekbone, fractured skull, and a broken leg.

Stacey Koon, Laurence Powell, Timothy Wind, and Theodore Briseno were all charged and went to trial in April 1992.

The jury was comprised of nine White jurors in comparison to just one Black, one Asian, and one Latino juror. After seven days of deliberation and no testimony from King, the jury ruled in favor of the police officers. The news of the verdict spread quickly through the city, which erupted in violence.

On the first day, around 300 people gathered at the Los Angeles County Courthouse in protest of the verdict. The crowd began to swell and police responded but were outnumbered. From there, widespread looting and violence occurred in various locations in Los Angeles.

One of the most-violent incidents of the day was the attack of White trucker Reginald Denny, who was pulled from his vehicle by a group of men and beaten into nearly having a seizure by a mob led by Damian Williams. An unarmed Black man, Bobby Green Jr., came to Denny’s rescue and drove him to a hospital.

In the same area of the Denny beating, Fidel Lopez, an immigrant from Guatemala, was beaten and robbed. Williams also stuck Lopez violently in the head with a heavy object, and the mob spray painted Lopez’s body and genitals black. A reverend intervened in the melee, saving Lopez’s life.

On the second day of the riots, the looting and fires across the city continued. The media frenzy around the riots had even reached over in to network television, with comedian, philanthropist, and actor Bill Cosby urging rioters to stop the violence and instead watch the series finale of the popular NBC series “The Cosby Show.”

By the third day, Governor Pete Wilson requested federal aid in combating the riots, with King appearing on television making his now-infamous plea, “People, I just want to say, you know, can we all get along?” His plea instantly became infamous because the public didn’t want peace, they wanted justice.

The next day, U.S. Marine troops and the state’s Army National Guard moved in to assist the police in controlling the riots. There was also a peace rally held that day attended by 30,000 people, and the violence had finally begun to settle.

By the sixth day, things quieted, and on Saturday, May 4, Mayor Tom Bradley lifted the curfew and reopened schools and businesses. The federal troops left on May 9th, with the Army National Guard remaining until May 14th.

A federal investigation in to the Rodney King beating was enacted, which led to the prosecution of Koon and Powell, who were largely seen as the ringleaders in the case, with Powell delivering many of the damaging blows.

Both men served 30 months in prison for their role in the beating.

King was awarded $3.8 million by the city of Los Angles for damages and invested his money into a failed rap label. King had further run-ins with the law, but tried to settle in to normal life despite a stint on reality television at one point. King was found dead in his swimming pool on June 17, 2012.

SEE ALSO: ANC Bombing During Last Day Of White Rule Happened On This Day in 1994