After living five years in exile, Ethiopia’s Emperor Haile Selassie I returned to the capital city of Addis Ababa on this day in 1941. Five years prior on the same day, the emperor would flee Ethiopia as the Italian invasion, which began in 1935, overtook the country. The emperor was patient in rising back to power, using political connections and the military might of his allies to defeat the fascist Italian forces, prompting Ethiopia’s liberation.

SEE ALSO: Children’s Crusade March In Alabama Began On This Day in 1963

In October 1935, fascist Italian war leader Benito Mussolini launched his invasion of Ethiopia. Held at bay by Emperor Selassie’s troops, Mussolini would eventually enter Addis Ababa on May 5, 1936, declaring the country as part of the Italian empire and Italian East Africa. Consequently, Emperor Selassie appealed to the international group the League Of Nations for assistance.

The League didn’t have the powers or military force that its successor group, the United Nations, has today. At the time, the League had power to impose sanctions, which served as weak salvos in support of Emperor Selassie gaining power in his country again. Emperor Selassie made a speech to the league, making him a champion of anti-fascist thought, and winning him the TIME magazine “Man of The Year” award (pictured). 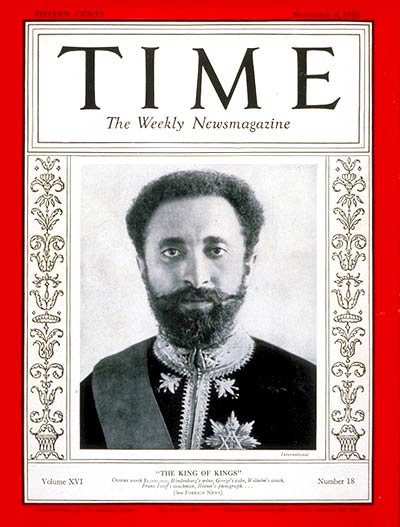 However, the League was essentially powerless to stop Mussolini from doing what he wanted. Italy’s military was far more advanced than Ethiopian forces, and they violated the Geneva Convention rules by employing the use of chemical warfare. Selassie began to gather support from the United States and others who felt Mussolini’s occupation was unjust. Emperor Selassie was able to get support from his international allies in crafting a war effort to liberate Ethiopia. The emperor wanted to employ peaceful means but that would not come to pass. With the help of the Gideon Force, a small British special forces troop designed to oppose Italy’s occupation in the region, the emperor started to make his slow march back to his rightful throne. With the help of Ethiopian patriots and a collective of soldiers from the United Kingdom, France, and Belgium, the emperor would beat back Mussolini’s forces nearly in total and address his people with a message of hope. Below is the Liberation Day speech delivered in Addis Ababa as written in Emperor Selassie’s autobiography, “My Life and Ethiopia’s Progress”:

This day, on which the people of Ethiopia are freed from the oppressive foreign yoke and eternal servitude and on which I am enabled to rejoin my people, whom I love and have yearned for, will be honored as a holiday to be commemorated annually as a Great Ethiopian Anniversary. … Today is the day on which we defeated our enemy. We shall see that our enemies are disarmed and sent out the same way they came.

The Rastafari Movement, born in Jamaican in the 1930s, saw the emperor as God incarnate and began to worship him as such. As a Black monarch of an African country at the time, Rastafarians hailed the emperor’s defeat of Mussolini as part of the movement’s prophecies.

RELATED: Jamaican ‘Back-To-Afrika’ Delegates Arrive In Ethiopia On This Day In 1961