For the first time since they were born two years ago, Kenyan conjoined twins Blessing and Favour will be able to see each other’s faces after they were surgically separated Thursday.

According to Capital FM and the Kenyan government, a multi-disciplinary team of 50 medical specialists from Kenyatta National Hospital (KNH) and the University of Nairobi’s School of Health Sciences separated the conjoined twin girls in a 23-hour operation.

The girls are the second case of conjoined or Siamese twins who have been successfully separated in Africa.

“It is the first time in sub-Saharan Africa — outside South Africa — where this kind of operation has been done successfully. So this fete is a statement to the world in KNH and in Kenya, we can do what other people can do. This day marks the culmination of those two years of preparation, and I’m humbled by the importance and enormity of this event, ” KNH Acting Chief Executive Officer Thomas Mutie said.

The lower spines and bottoms of Blessing and Favour were joined, meaning they had to share an excretory opening. The twins, however, had well-developed upper torsos.

For the last two years, they and their mother, Caroline Mukiri (pictured below, top left), were at KNH in order to develop enough muscle for doctors to surgically separate them.

According to the University of Maryland Medical Centre, conjoined twins occur once for every 200,000 cases of live births. The twins are often identical and share the same sex. And in 40 percent of conjoinment cases, the twins share a heart.

The maximum survival rate of conjoined twins is 25 percent. Their successful separation is rare, with one of the twins likely to survive the surgery 75 percent of the time, which is why Blessing and Favour are among the lucky few to have both come out of the surgery alive. 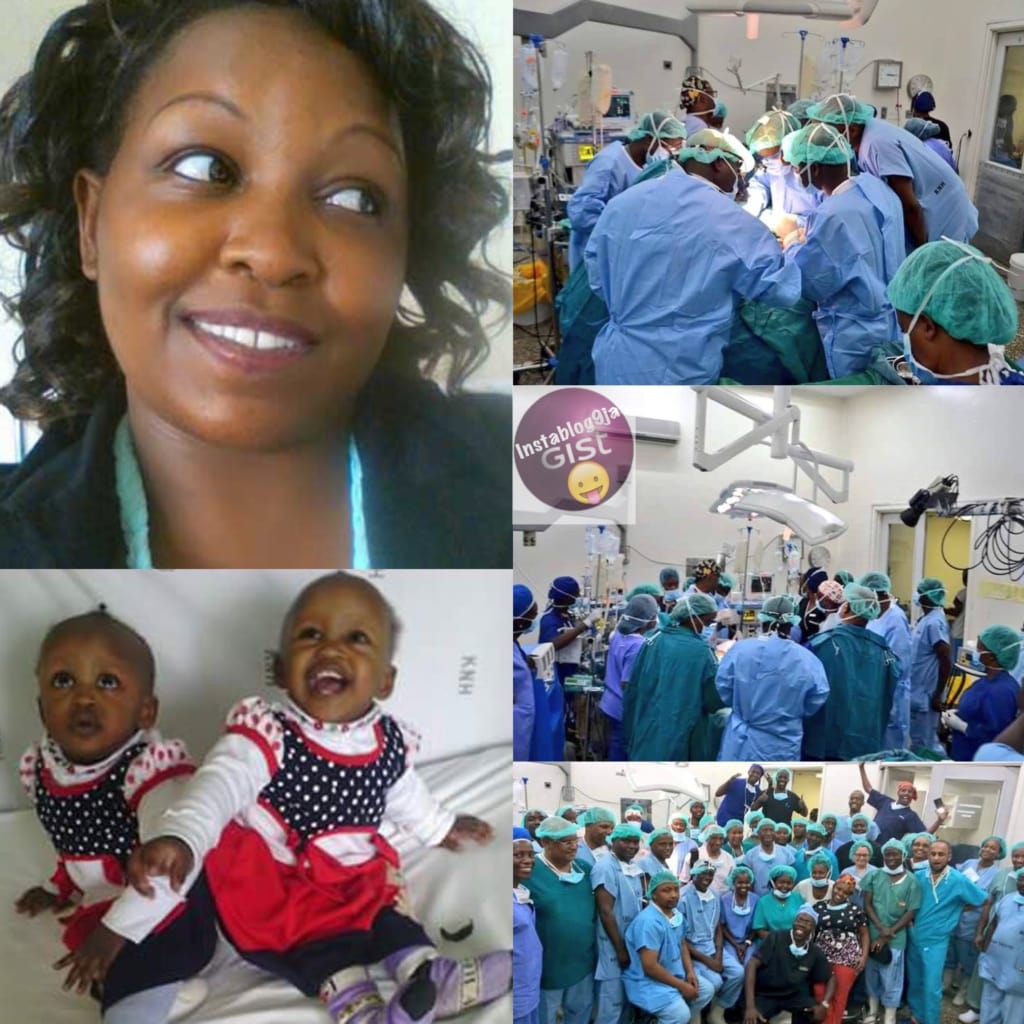 In a statement from the Kenyan state house, President Uhuru Kenyatta commended the efforts of the doctors in this historic case.

“H.E. the President wishes the twin girls a quick convalescence and all the best as they embark on life after the surgery. The joy of the mother, relatives, and family friends of the girls is shared by the whole nation and beyond.

“The Head of State also thanks the medical team for their outstanding work, dedication, and a great sense of civic duty. The successful surgery by the multidisciplinary team is a continental first, and given the fact that it was conducted at the KNH Main Theatre, it is testimony of the vast improvement in the quality and capacity of healthcare facilities and services available in Kenya’s public hospitals,” the statement read.

At press time, it is unclear when Blessing and Favour will undergo reconstructive surgery after their separation.

Successful surgeries involving conjoined twins are rare but not new in sub-Saharan Africa. For instance, according to the New York Times, South African male conjoined twins were successfully separated by a team led by renowned American neurosurgeon Dr. Ben Carson, with both boys surviving the surgery in 1998.