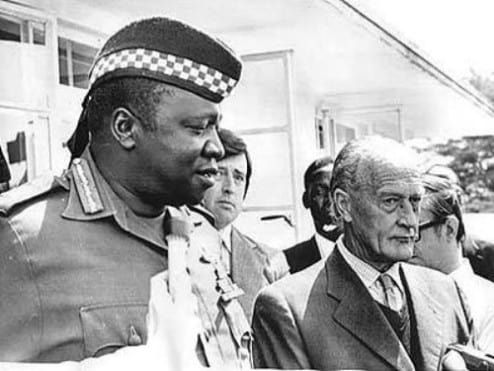 British professor and author Denis Hills (pictured right), a former military officer who found academics along his journey, traveled to Uganda in 1963 to resume his teaching duties. On this day in 1975, Hills incurred the wrath of dictator Idi Amin (pictured) and was ordered to die for treason. Hills barely escaped with his life.

Amin seized power of Uganda in 1971, when Hills was already long established in the African nation. Hills taught at Makerere University in Kampala. The professor was writing a book titled “The White Pumpkin,” in which he openly criticized Amin’s vicious rule and called him a “tyrant.” This “capital offence” led to his arrest in April 1975. Hills was charged with espionage and treason and was tried and sentenced to die by a firing squad.

Queen Elizabeth of Britain and Prime Minister Harold Wilson corresponded with Amin in a request for leniency. Amin was wary of Britain’s intervention in rescuing Hills, and he begun to suspect that the country was conspiring to invade his nation along with other nations.

Columnist and author John Kazoora wrote an op-ed for Uganda’s Daily Monitor that spoke to the finer points of Hills’ situation:

The ‘capital offence’ Dennis Hills had committed was tactlessly comparing Field Marshall, Conqueror of the British Empire and Life President Idi Amin Dada with Emperor Nero and describing him as a “village tyrant” in a leaked pre-publication manuscript of his book, ‘The White Pumpkin.’ On June 11, 1975, Dennis Hills was sentenced to face a firing squad at Clock Tower.

The Queen of Britain Elizabeth and her then-Prime Minister, Harold Wilson (later Baron Wilson of Rievaulx), wrote to Amin asking for clemency. Lt-Gen Sir. Chandos Blair and another of Amin’s former commanding officers were sent out to seek – unsuccessfully – a change of heart but Idi Amin wanted a stage on which to bargain. It was all very difficult as the moody maverick began to fantasize that an invasion of Uganda was being planned by Britain, Kenya, Tanzania, Zambia, and Israel.

James Callaghan (who later became UK Prime Minister and retired as Lord Callaghan of Cardiff) feared for the rest of the British community but correctly insisted on a firm promise that Dennis Hill would be released before he agreed personally to visit Kampala. It was on the intervention of another Life President, Field Marshal Mobutu Sese Seko of the then-Zaire that they eventually stabilized the situation.

Hills did apologize for what he wrote, but published the book in 1976 and added the words “village tyrant” back in to the text.

SEE ALSO: Igbo Nation Biafra Seceded From Nigeria On This Day In 1967