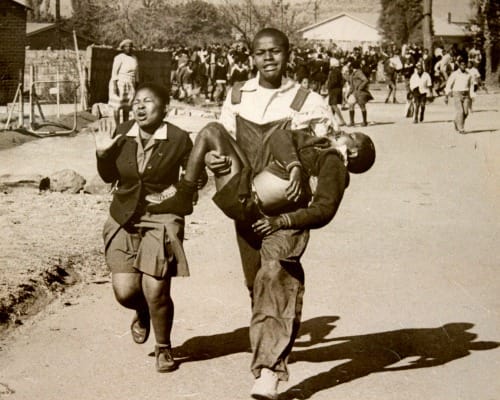 One of the most-explosive moments in South Africa’s storied history is the Soweto Uprising, or the “16 June” events, which took place on this day in 1976. According to some accounts, Sowetan students protested the introduction of Afrikaans as a language next to English but other factors may have been at play as well.

What historians also note is that the Bantu Education Act of 1953 and its introduction by the Apartheid-led government was another factor leading up to the protests. For decades, Black South Africans lived under segregated rule and endured systematic racism that was politically ordained by the ruling party.

Amazingly, the Act was made a part of the Department of Native Affairs and organized by Dr. Hendrik F. Verwoerd.

The doctor, who expedited the Act getting passed, infamously quipped that Natives (Black South Africans) should be taught from childhood that being equal with Whites was an impossibility.

As time went on, Black students grew tired of the division and began to speak out. The forming of the Black Consciousnesses Movement (BCM) and the South African Students Organisation (SASO) gave voice to young people who wanted to do away with the racist policies that held them back. These groups began to involve themselves in anti-Apartheid matters and helped bring awareness to other students looking to challenge the system.

The mandatory placement of Afrikaans in schools in 1974 galvanized the protesters.

The following year, around 10,000 to 20,000 students left their schools and staged a protest with the help of the Soweto Students Representative Council’s Action Committee and BCM groups to protest the language inclusion that was months in the making. The marchers were planning to rally at Orlando Stadium at the end of their path.

Along the way, they were confronted by police who fired tear gas and then gunfire at the students. According to a 2006 documentary, police Colonel Kleingeld fired the first shot, although it was not determined if the students struck the first blow with stones. The police were heavily armed and let loose attack dogs on the crowd that the students stoned to death.

The situation sparked a riot, and 13-year-old student Hector Pietersen has been considered by most accounts to be the first casualty of the uprising. The photo of Pietersen’s lifeless body being carried by 18-year-old Mbuyisa Makhubo (pictured top) is one of the most iconic and troubling images to emerge from the uprising.

The students were able to beat back the heavily armed police forces by barricading themselves in, in order to keep police at bay and continue assaulting them with sticks, stones, and other weapons. The battles between the students and police died down by the third day of protests, but the fighting continued on a few months after.

An estimated 451 people died at the hands of police with a total of 575 dead overall. A majority of those killed were Black students, who boldly began seizing police weapons and firing on the troops.

The incident in Soweto gained the support of Whites in Johannesburg, who marched in protest of the police slaying unarmed children. Black South Africans joined with the Whites in a joint march By years end, it was said that over 600 people had died, and the conflicting numbers of those lost are still a point of curiosity.

The uprising would spark the rise of the African National Congress (ANC) and other anti-Apartheid groups in the nation. The international community frowned upon the South African government’s attacks on the children and called for sanctions against the country.

SEE ALSO: Idi Amin Critic Denis Hills Sentenced To Death By Uganda On This Day in 1975