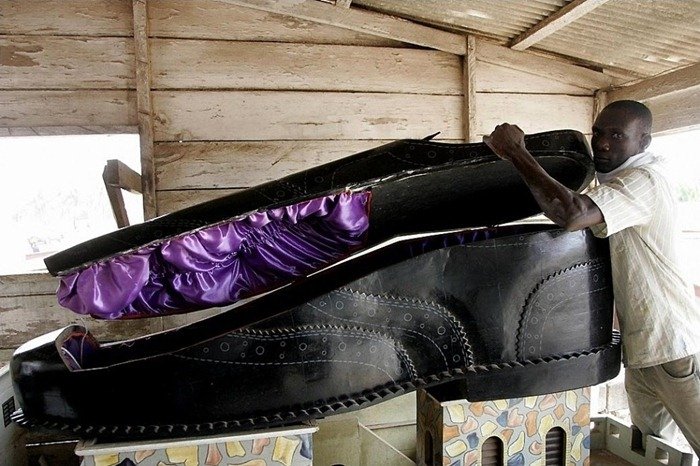 Ghanaian fantasy coffin in the form of a shoe…Amusing Planet

Within the Akan tribes in Ghana, funerals include a succession of activities that span over a period of time.

Some activities include wearing black or red if the deceased is a family member.  Others include offering libations to the ancestors and festive celebrations of drinking, food and dancing.

If the deceased was a Christian, religious funeral rites will be afforded such as a prayer by a person of the cloth. If they followed traditional religions, the emphasis wouldn’t be placed on religious rites.

One unique aspect about certain funerals in Ghana is the dead being buried in “fantasy coffins.”

Fantasy coffins are those which are crafted after a certain item such as a bible for an avid churchgoer or a fish for a fisherman.

When you laid to rest as an ECG staff because you like your job pic.twitter.com/zijW1pD8Tf

Some are buried in unique positions such as sitting down or standing.

In the Ashanti tribe, the eldest woman in the family must wash the corpse three times, dry it and dress it.