Renowned Congolese gynaecologist and surgeon Dr Denis Mukwege has been named the winner of the 2018 Nobel Peace Prize which he won with Nadia Murad for their efforts to end the use of sexual violence as a weapon of war and armed conflict.

Mukwege, popularly known as the ‘rape surgeon’, becomes the 23rd African and first Congolese to ever win the Nobel Peace Prize which was last awarded to Africans in 2011; Ellen Johnson Sirleaf and Leymah Gbowee of Liberia.

“Denis Mukwege’s basic principle is that ‘justice is everyone’s business’. The 2018 Peace Laureate is the foremost, most unifying symbol, both nationally and internationally, of the struggle to end sexual violence in war and armed conflicts,” says the Nobel Committee after the announcement on Friday, October 5, 2018.

Watch the moment the 2018 Nobel Peace Prize is announced.

63-year-old Mukwege has helped thousands of women and girls who have been victims of rape and sexual abuse at the hands of rebel forces in the Democratic Republic of Congo since the beginning of the civil war in the early 90s.

He founded the Panzi Hospital in the South Kivu province in 1999 to provide free and comprehensive care for female victims of rape and other forms of sexual violence during the conflict.

Denis Mukwege’s basic principle is that “justice is everyone’s business”. The 2018 Peace Laureate is the foremost, most unifying symbol, both nationally and internationally, of the struggle to end sexual violence in war and armed conflicts. @DenisMukwege#NobelPrize pic.twitter.com/KSzecKSkUc

Mukwege will receive a citation and an 18-carat gold medal that bears the face of the founder Alfred Nobel at an award ceremony in December. The prize for the joint winners includes SEK 9,000,000 ($1,110,000) which will be paid next year. 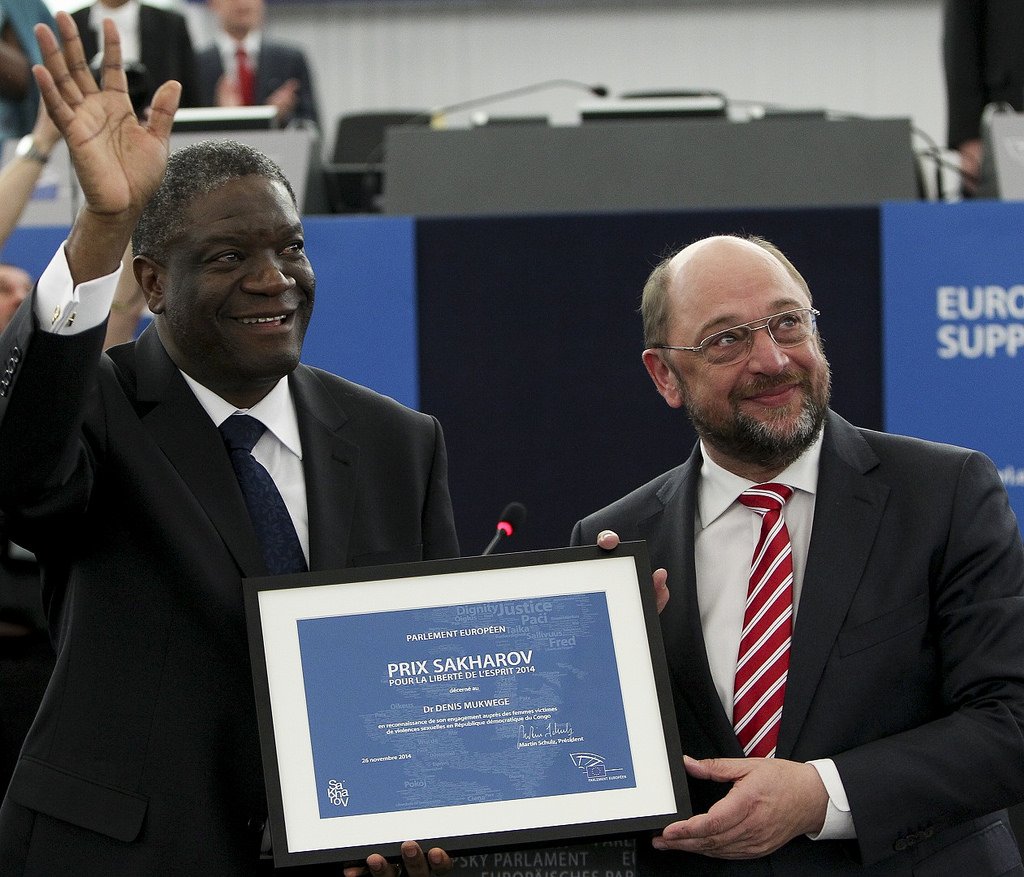 Mukwege has received scores of honours including Europe’s top human rights prize – Sakharov Prize – and three nominations for the Nobel Peace Prize for his service and fight against sexual violence. He was also named by TIME magazine as one of the world’s 100 most influential people in 2016.

His hospital treats over 46,000 girls and women with gynaecological injuries, about half of them, victims of sexual violence.

Mukwege has been very vocal in the DRC where he called for a change in the country’s governance system. This he re-emphasized during a speech at the United Nations in 2012 where he condemned the government’s passive response to the violence against women.

Despite the numerous support he gained from the public for his vociferous nature, he narrowly escaped an assassination attempt in 2012 that claimed the life of his guard who took the bullet in his place.

Mukwege went into exile in Europe but later returned to a rousing welcome the following year to help his struggling hospital to stay open.

The life of the “rape surgeon”, as he is popularly called, has been documented in the film, “The Man Who Mends Women”, and a book.

History of the Nobel Prizes

The Nobel Prizes have been awarded since 1901 and conferred on top achievers in six fields: Physics, Chemistry, Literature, Physiology or Medicine, Promotion of Peace and Economic Sciences.

Prize-winners are often individuals, teams of two or three and organisations called Nobel Laureates. The laureates are nominated by their peers, including former laureates, politicians, justices and academics among a few others, and then secretly chosen by Nobel Committees and prize-awarding institutions.

The Committee chooses the laureates through a majority vote before the winner is announced in October.

The awards were created by Swedish scientist and philanthropist Alfred Nobel who bequeathed most of his fortune to the establishment of the prize upon his passing in 1896.

The first prizes were presented in 1901 and since then, over 900 people have been awarded.

Details of the selection process and nominees can only be revealed until after 50 years.

Despite the Nobel Foundation’s requirement that prizes be awarded only to living recipients, Canadian immunologist Ralph M. Steinman was awarded a 2011 Nobel for medicine posthumously. The committee did not know he had died three days prior.

The winners receive their prizes at a ceremony on December 10th – the anniversary of the death of Alfred Nobel.

The prize includes a sum of money, a citation and an 18-carat gold medal that bears the face of the founder Alfred Nobel. The money is received after a year.