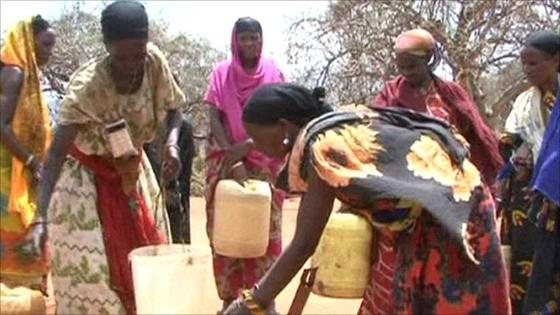 A severe drought threatens the lives of millions of people living in Somalia, Eritrea, Ethiopia and Djbouti.

Government officials and outside agencies hope to prevent a famine.

Droughts and famines are not new to people living in the horn of Africa. Many are still trying to recover from the drought in 2009.

Millions of children are suffering from malnourishment. Millions more are fleeing countries, like Somalia, in search of food and better opportunities to earn a living, or even a simple meal.

While aid agencies have historically aimed at providing food for those suffering during a famine, this time around, government officials and aid agencies are trying to put into place “safety nets,” which will prevent a widespread famine — that could leave 100 million people without food — from occurring.

Officials are also thinking about ways to remedy the plight of herders and farmers who provide their own food. The current drought has claimed the livelihood of many herders, forcing them to leave their homeland in search of better land for their cattle to graze. According to BBC News, aid officials have estimated the deaths of cattle at 500,000 in Ethiopia alone.

Officials have also estimated that 35-40 percent of children under the age of five in the horn of Africa are malnourished. They are not getting the daily-recommended value of fat, carbohydrates, proteins, vitamins, and other nutrients. This is double the number of cases that warrants an emergency response.