El Aty, 36, is set to fly from her home in Alexandra, Egypt, to Mumbai, India, to see Dr. Muffazzal Lakdawala, one of the world’s leading weight-reduction surgeons who has offered to treat her.

According to the BBC, at her weight, El Aty is believed to be the heaviest woman in the world. 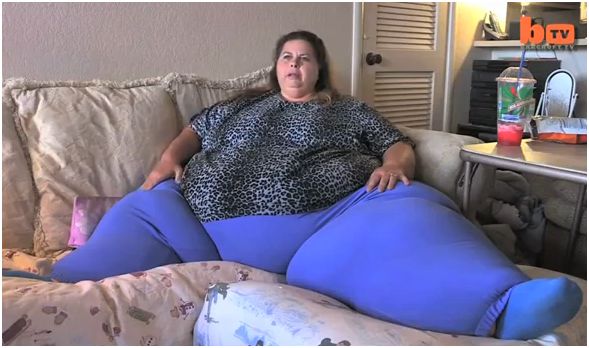 In 2012, Pauline Potter of the United States was the holder of the Guinness World Records’ Heaviest Woman Alive at 643 pounds.

Because of her immense weight, El Aty will have to be flown out on a chartered plane fitted with a reinforced bed to Mumbai, where Dr. Lakdawala, who believes she can reduce her weight to 400kg or 881 pounds, plans to operate.

Indian embassy officials initially denied El Aty a visa, because they didn’t believe her claim that she could not make it to the embassy because of her size; Indian visa regulations require all applicants to be physically present at the embassy office to scan fingerprints.

However, an intervention from Dr. Lakdawala — through a tweet to India’s External Affairs Minister Sushma Swaraj — was enough to earn El Aty special consideration from embassy officials. Dr. Lakdawala has also gone on to spearhead fundraising efforts for El Aty’s surgery since her family cannot afford the cost of treatment or flight expenses.

El Aty has been bedridden for much of her life, and her journey to India will be the first trip out of her home in 25 years. She is cared for by her mother and sister Chaymaa.

Her family says she weighed almost 5kg or 11 pounds at birth and was diagnosed with elephantiasis – a parasitic infection that causes extreme swelling in a sufferer’s limbs and arms. At 11 years old, El Aty took to crawling since her limbs could no longer support her enormous weight.

Dr. Lakdawala, though, disputes the elephantiasis diagnosis, believing instead that she suffers from obesity-related lymphoedema, which causes gigantic swelling of the legs.

Dr. Lakdawala added, “They said when she was 11, she had gained immense weight…she could not stand up and would crawl.

“And then she suffered a stroke which left her bedridden and she has not been able to leave home since then.”

In India, El Aty is scheduled to undergo bariatric surgery or weight loss surgery, a procedure used to treat persons who are morbidly obese and carrying excessive amounts of body fat. Since the procedure reduces the size of the stomach, patients need less food to feel satisfied.

About El Aty’s current situation without treatment, Dr. Lakdawala explained, “She is a living time bomb.” Still, he is optimistic about what the surgery may be able to do for her.

“I’m hopeful that I will be able to help her, I won’t say I’m confident because I think that would be an exaggeration,” he said.

“We have to take special precautions in this case to ensure there are no problems in the lung or the risk of a blood clot.”

After El Aty goes through the procedure, she will have to stay in Mumbai for about three months. According to Dr. Lakdawala, it will then take an additional two to three years for El Aty to reach a body weight of 100kg or 220 pounds.