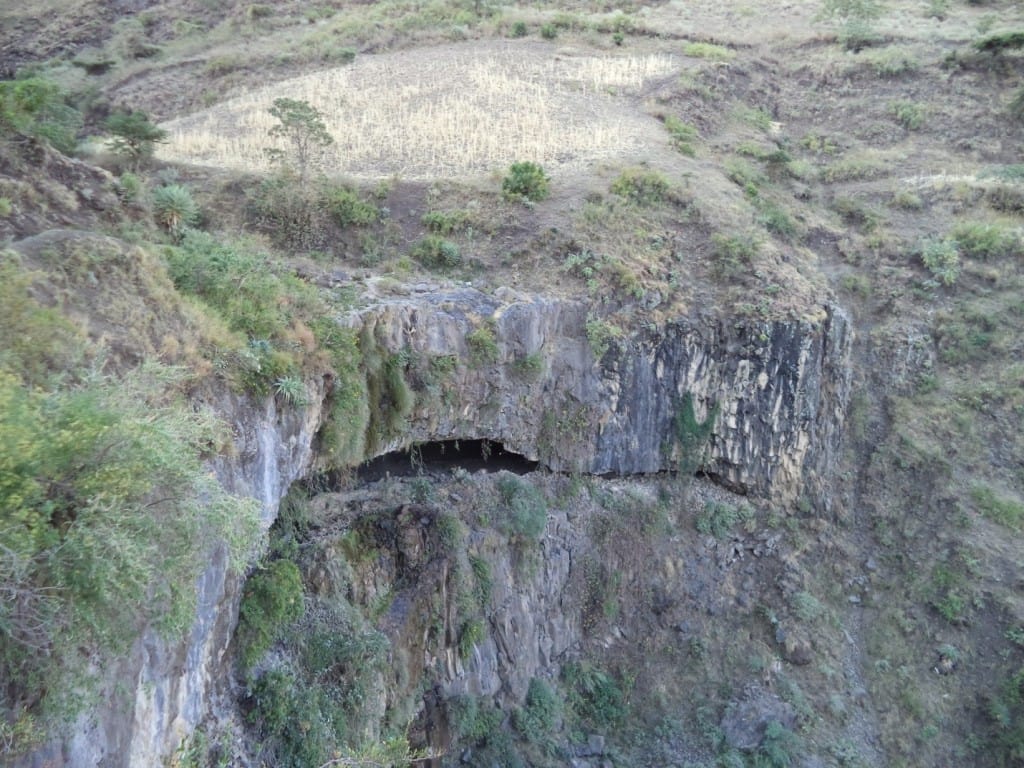 The mouth of Engidwahsa cave

It was nine years ago that for the first time I experienced what I call “Adefris Syndrome.” Like “Adefris,” the character in Daniachew Worku’s prominent Amharic novel, I continually raise new ideas that seem strange to local people. As a college student, I tried to share ideas from my modern life and education with the people of my birthplace.

At the time, I was not accustomed to reading fiction during my summer break, but mostly to listening to the radio and entertaining new thoughts, such as, Why not introduce some places of importance from my hometown, Sasit, a three-hour drive north of Debre Birhan, to the public and tourists?

I knew the first step was to visit them myself and thoroughly research them by collecting oral stories about Engidwasha, a spectacular cave found in Moja, the place formerly known as Tegulet. Many people told me that a local patriot, Kasaye Wendaferew, had used Engidwasha to hide nearby residents and all of their livestock from fascist butchers in 1935.

I asked my interviewees, most of whom were community elders, if they knew how big the cave was, and they said it was endless. With my collection of oral stories complete, I started the job of organizing some people to venture in to the cave. 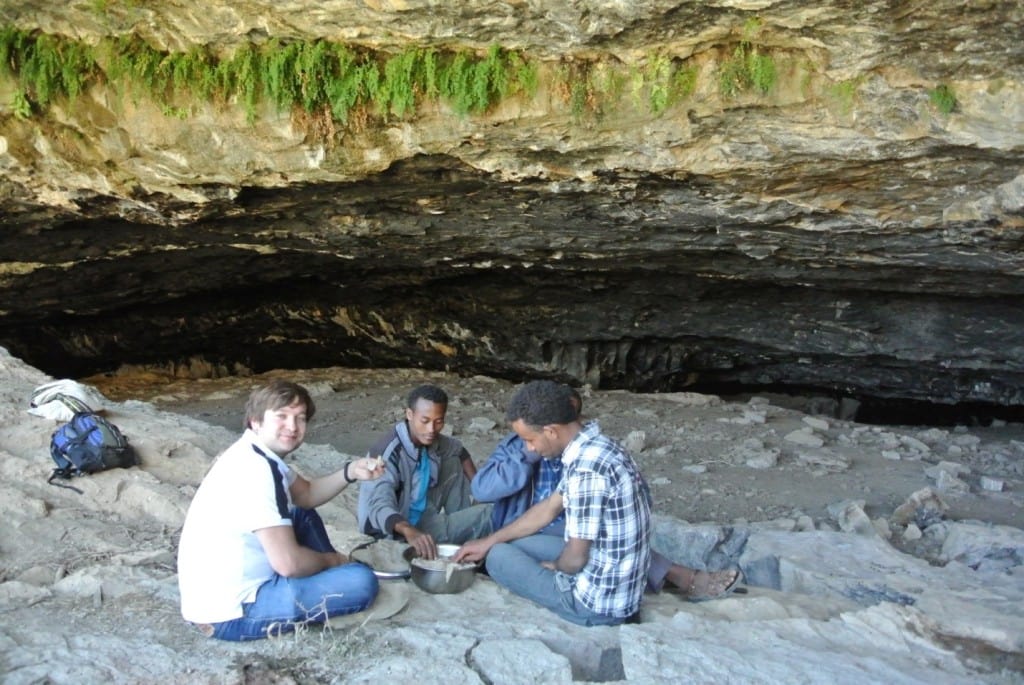 From left to right Alex, Lemma, Teshome and Kelelaw dining at the mouth of the cave

Around 100 people from the area organized themselves and prepared to go in to its heart. On Sunday, September 17, 2006, around 6:30 a.m., the amateur researchers came face-to-face with the graceful cave that resembled the entrance to hell.

The locals call it “hyena cave” and dreaded entering it, but just as “Adefris” drives his people toward a plethora of thoughts, I was driving my compatriots into this fearsome living hell relying solely on oral history. 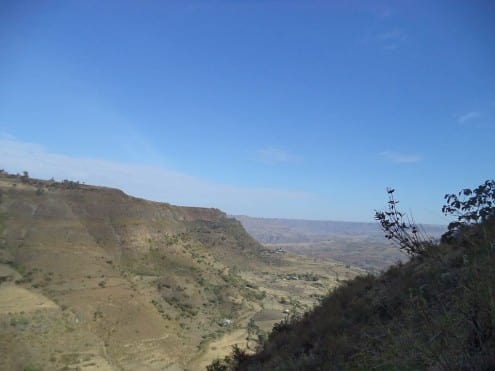 The view from mouth of the cave

Before we went into the cave, we enjoyed the surrounding scenery and the horizon, which included views of Menz and Selale that appeared before us as the sun rose behind the cave. 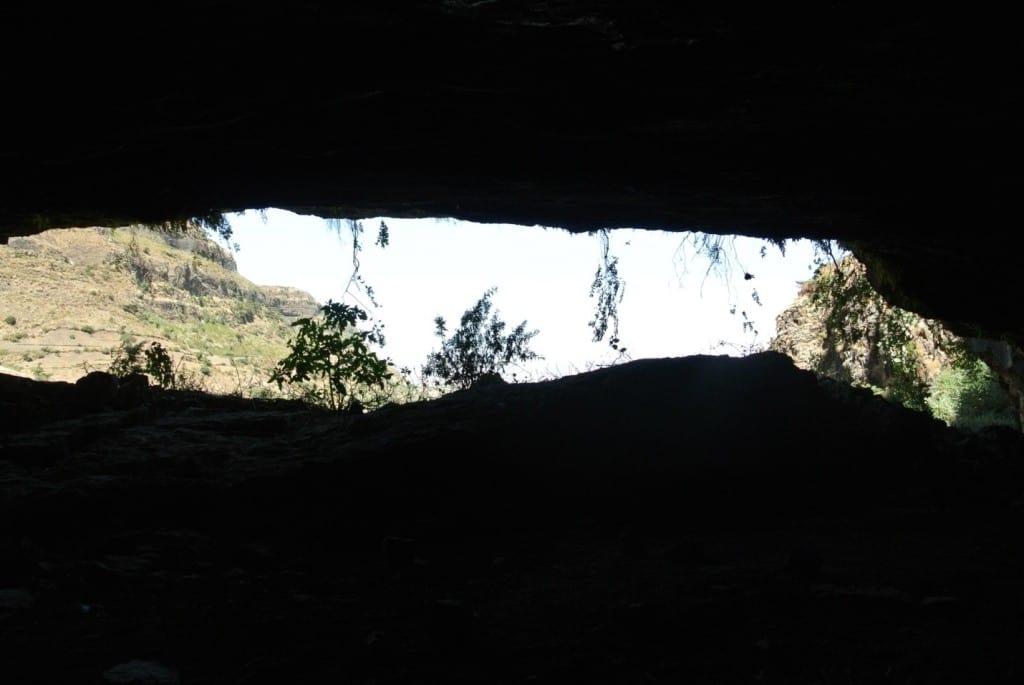 A view from inside Engidwasha

Touching the waterfall, we could get an intimate sense of the seasonal gift, which made us feel we had nature in the palms of our hands.

The mouth of this magnificent natural wonder of Tegulet measures 105 meters wide. Inside, its height varies from one to three meters, and it is necessary to crawl along the narrow parts to reach the furthest corners of the cave.

The ascending and descending roofs give the cave the look of a big tent. Inside the cave, impenetrable darkness and stalactite and stalagmites — coupled with the stories about the presence of hyenas, tigers and snakes — make it a fearsome place.

Two brave local men, Ashenafi Workshet and Dereje Asrate, were courageous enough to go through the narrow passageways and into the inner parts of the cave.

Rocks; wild animal excrement; dry, red soil; and the skeletons of both animals and people are some of the things we stepped on as we went in deeper. The roof of the cave was dark, but when we scraped it, we saw that it twinkled with minerals.

The elders of the area told us that Engidwasha had been darkened by the patriots who used smoke from torches to prevent the Italians from seeing what they thought were precious minerals and taking them away.

When I read the biography of the late-Haile Giorgis Workneh, the first Ethiopian civil engineer to receive a doctorate, I learned that a cave near Sasit served as a shelter for more than 400 patriots and their family members who were on the run during the Italian occupation in 1937.

And after 14 days of hunger, thirst and confrontation, the men were butchered and the women and children, including Haile Giworgis, were taken to a prison in Menz and eventually Debre Birhan.

I believe Engidwasha must be the cave from the story Haile mentions because of its size and the presence of a waterfall in front of it.

More Research To Be Done

I recommend an organized visit be made and research conducted in Engidwasha. It is a fertile area for research by archaeologists, geographers, historians, and geologists — all of which that can be done at universities like Debre Berhan, which is the nearest to the cave.

I invite all of my readers to make the journey to Sasit to visit and explore inside the magnificent Engidwasha cave and other natural and historical caves. You can walk the hills and valleys that the Ethiopian patriots walked in order to see their fortresses and sit under the same trees where the patriots sat and plotted counterattacks against the enemy as they sheltered themselves from the sun.