Eritrea is one of the youngest countries in Africa, becoming an independent nation in 1993 after a bitter war that lasted 30 years to cut itself loose from Ethiopia. And while there were a number of grand plans to come with independence, 23 years later, most of Eritrea’s population of a little more than 6 million people are disenfranchised due to forced conscriptions and a life below the poverty line.

After independence from Ethiopia, Eritrea under its new leader Isaias Afewerki pursued a policy of “self-reliance” that meant the nation would produce whatever it needs.

And while that may sound like a country serious about rapidly developing its economy using home grown technology, Eritrea has instead become caught up in a web of quasi-communist drawbacks that impede a flexible market system and hinder foreign investments.

More than two decades later, international isolation and a near police state are the hallmarks of the government, which maintains firm control over all sectors of Eritrean society, including the economy, politics, education, and even employment.

Eritrea enforces a system of compulsory national service for all of its citizens, with young Eritreans automatically conscripted in to government service when they come of age.

Some of them serve in the military, but many more are forced to work in the civil service. Wages and salary are typically low and working conditions are often intolerable. Many have to supplement their income by working an extra job or two. 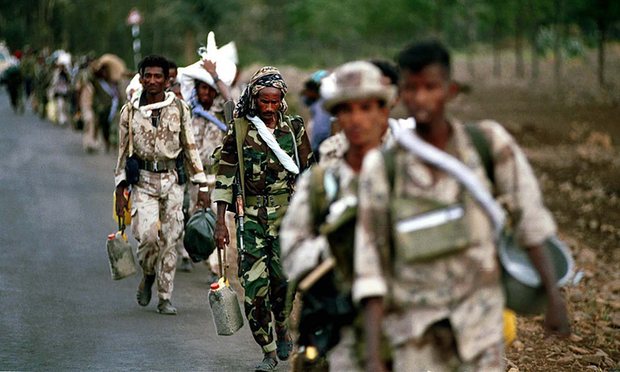 All Eritreans adults below the age of 50 are conscripted by the government. The Guardian

At its launch, the conscriptions were supposed to provide Eritrea with necessary military manpower and a dedicated, hardworking, disciplined, and self-reliant workforce committed to transforming the young country into a modern nation state.

But the conditions of Eritrean national service are reportedly harsh; citizens who have come of age and are less than 50 years old are required to serve for an indefinite period with many having no idea when they will be released.

Many conscripts work on building or road construction projects and earn about a $1.50 per day. In fact, estimates indicate that about one in 20 Eritrean nationals live as conscripts in government barracks spread across the mostly desert country.

A United Nations-appointed Commission of Inquiry recently described the conscriptions as modern-day slavery and a crime against humanity.

The government, however, denies the charges, reiterating its position that the national service is essential to providing the country with manpower and protecting its territory.

The harsh condition of National Service is one reason why so many young Eritreans flee their country of birth.

And while poverty, which is widespread, is another reason why many Eritreans flee their country, it is the restrictive condition of National Service that prompts many Eritrean youths to attempt to go over the border.

It is of course illegal for an Eritrean national to leave the country without an exit visa, which is reportedly difficult to obtain.

Many say they feel trapped or held hostage by the authorities and are often willing to go to any length to escape to Europe, trekking across the unforgiving Sahara desert or crossing the Mediterranean on overcrowded ferries or dinghies.

And even though many of them die during the course of their dangerous journeys, those facts haven’t stopped the constant outflow of emigrants out of Eritrea.

In 2015, more Eritreans crossed the Mediterranean illegally than any other nationality, comprising about 25 percent of the total migrants on the route.

Many Eritrean migrants first make their way to Libya, where they join other African migrants in a desperate attempt to cross the Mediterranean. Often they reach for the Italian island of Lampedusa and onward in to Europe.

Some of those attempts at crossing the Mediterranean have ended quite tragically.

In 2015, 300 migrants — many of them from Eritrea — died when their boat capsized off the coast of Lampedusa while trying to cross the Mediterranean.

And in July, authorities in Switzerland were stunned to find a young Eritrean migrant who had stuffed himself into his friend’s suitcase. 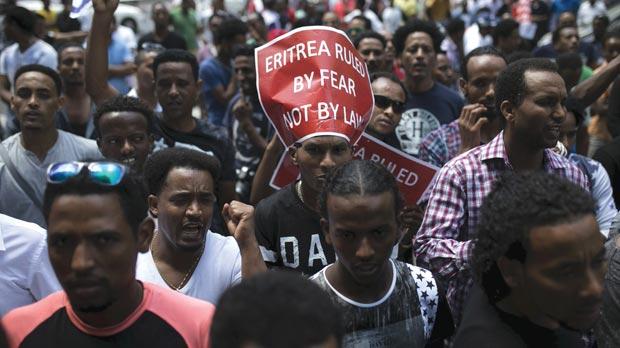 Eritrean migrants in Israel stage a protest against their government. times of malta

There is a renewed international interest in the plight of migrants from Eritrea. Many rights groups criticize Eritrea for its dismal human rights records and acknowledge that many youth are fleeing the country to avoid forced conscriptions and mass imprisonments.

Such reports have conferred nearly automatic asylum status to many Eritrean migrants when they arrive in European countries.

Due to the situation in their homeland, many Eritrean migrants in Europe now choose to spend money previously sent home as remittances for bringing over their relatives and friends from Eritrea to join them in Europe.