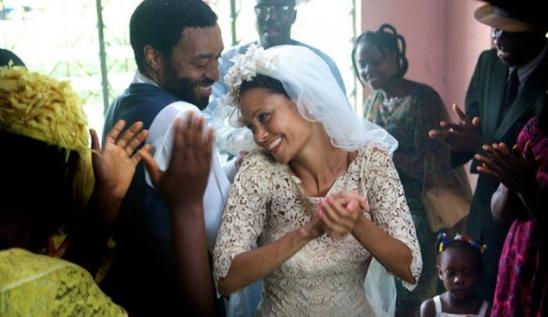 The film adaptation of Chimamanda Ngozi Adichie’s novel "Half of a Yellow Sun" wrapped on June 23rd in Nigeria.

It was shot in Calabar, Nigeria. It wrapped just before the beginning of the United Nations World Tourism Organization Commission for Africa. Adichie was a special guest at the conference.

The film stars Chiwetel Ejiofor, Thandie Newton and Genevieve Nnaji. Newton plays the role of Olanna, while Ejiofor takes on the role of Odenigbo, the revolutionary professor.

Original music for the soundtrack of the movie is partially provided by the musicians Cobhams Asuquo and Keziah Jones.

The film is set to hit theaters in 2013. Though it will have a large audience, some people are already critiquing the casting of the film.

Critics see the casting as yet another example of Eurocentric  concepts of race and identity that are predominant in the film industry. This is not only shown by the lightening of the character’s skin through casting, but also because Newton is half white. Her background is British and Zimbabwean.

Nevertheless, fans of book look forward to the film. If Newton’s acting surpasses what is expected of her, doubts will subside. It is a good thing, however, that audiences are demanding that characters are casted accurately. There are many different peoples living in the various countries on the African continent and it is important to recognize and celebrate these differences rather than erasing them.