Earlier this year, French President, Emmanuel  Macron announced that a commision has been set up to look into the issue of returning looted African artifacts to their rightful African countries. The announcement was made during a joint press appearance with the President of Benin Patrice Talon.

“African heritage must be highlighted in Paris, but also in Dakar, in Lagos, in Cotonou.In the next five years, I want the conditions to be met for the temporary or permanent restitution of African heritage to Africa.”

The commision is made up of Senegalese writer and economist, Felwine Sarr and French art historian Benedict Savoy who will return their findings in November this year. So far, the commision has identified that about 5, 142 objects that originally belong to Senegal in the Quai Brany-Jacques Chirac Museum for indigenous art from Africa, Asia and the Americas in France. Of the 5,142 African objects identified, 2000  of them are photos and pieces of pottery, statues, fishermens’ nets and ancient African textiles. 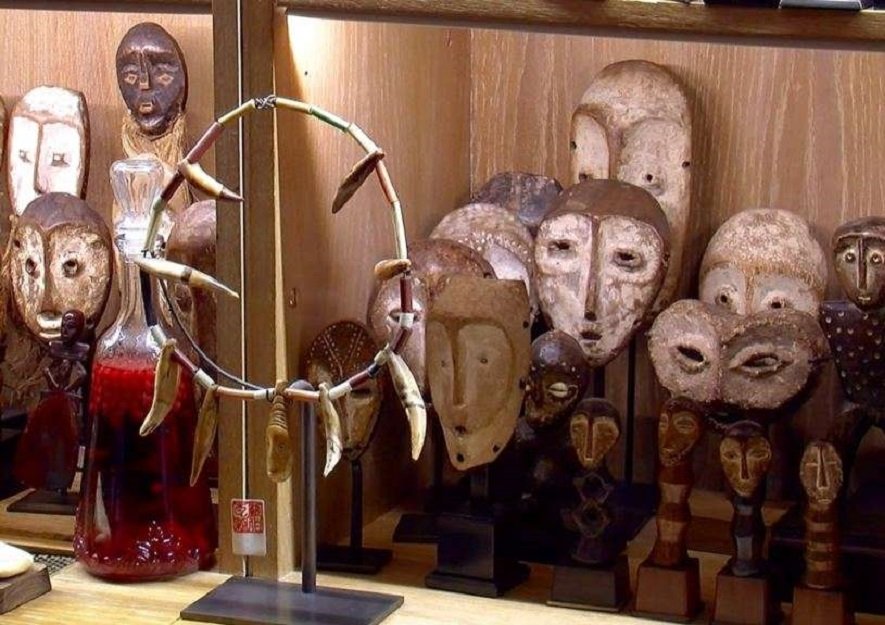 Beninese art at the gallery of Robert Vallois

Historically, the French government has been hostile to the idea of restitution with the notion that artifacts belonged to the public once they were placed in museums. In 2016, a letter was written to the then President of France, Francois Hollande stating that close to 6,500 artifacts between 1892 to 1894 were looted by French missionaries and authorities during the Franco-Dahomey War.

The letter was sent to the former president by the lawmakers and civil societies from Benin and France. However, the French government responded negatively to the letter stating that the artifacts rightfully belonged to France after being in the country for centuries. They also argued that one African country could not take ownership of all the artefacts as the then Kingdom of Dahomey, which is now Benin extended to parts of modern-day Nigeria.

The negative feedback did not stop the President of Benin, Patrice Talon from pushing for the return of Africa’s rightful properties lost to Europe after calling on French President Macron to revisit the case to see to the successful return of the artifacts to three modern museums set up to preserve the Dahomey royal culture.

While many are of the positive view that the artifacts will make a return to Africa, considering the progress the French government has made so far, a few hold the view that the case is a waste of time which will eventually not see the light of day.

Simon Njami,  head curator of the 2016 Dakar Biennale and editor of the African Art Magazine Revue Noire was quoted in a New York Times article explaining that African borders were drawn by European powers during the Berlin Conference between 1884 and 1885 and that it would be difficult to establish where old artifacts originated from without the reference to the boundaries.

Instead of attempting to return all the artifacts, Njomi suggested that the French government has a role to play in funding an exhibition of the artifacts across Africa. He added that Macrons pledge is “a foolish promise”.

Whatever your views might be on the issue, we will have to wait a few months more to know the next step after the commision presents their findings to the French government.