In many African cultures, there are rigid expectations and gender roles placed on men and women. There are strict rules that men and women are expected to carry out. For instance, a man is responsible for obtaining employment to financially support his family and a woman is mandated to deal with issues that arise in the household such as rearing the children, cleaning, and preparing meals for everyone in the home.  So it can’t be expected that gay, lesbian, and transgender lifestyles will be welcomed with open arms because the principles of those lifestyles are not the norm and don’t align with African cultures and traditions. 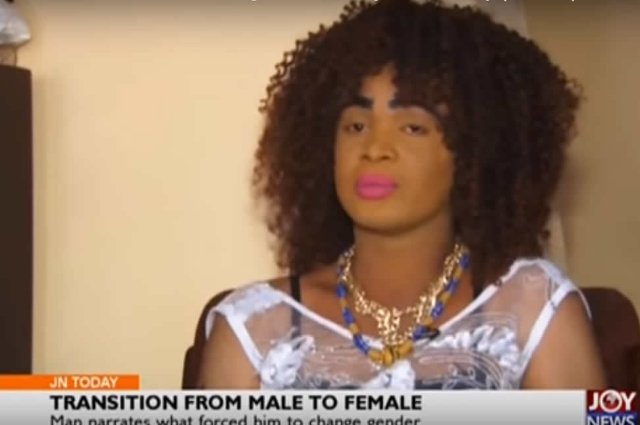 Now we’ll introduce 26-year-old hairdresser Angela Coleman as she would like to be called. Coleman suffered from relentless torment from strangers and people in her community because of her feminine traits and mannerisms despite being born male.

Coleman explained to local Ghanaian media Joy News: “everything I do in the house doesn’t look like a man, the way I walk, the way I talk, the way I greet. There is nothing that shows I am a man; I am a complete woman”. Coleman lamented to her grandmother that her nature and the negative attention and name calling she experienced was causing her extreme unhappiness.

This prompted her to begin taking medications after travelling to Spain where she started the process of her transformation from male to female and underwent sexual reassignment surgery.

Remarkably, Coleman’s family members are in full support of her sex change and lifestyle.  Her brother said: “We are proud of him; we can’t throw him away”. Coleman insists that the bullying she received was the strongest factor in deciding to change her sex.  She feels that the fact that she now identifies as a woman should be of no concern to anyone else because it’s her body and her choice.

Can this be the catalyst to beginning a conversation about gay, lesbian, and transgender rights in Ghana? What are your thoughts?

See the video below for more information.