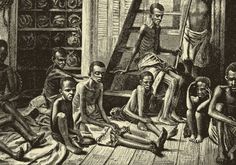 No food or water

Captives were expected to take their baths at least once every two days. They were also given the privilege to eat at least twice a day and were to be given safe drinking water, but in reality, none of these happened. Slaves were often served unwholesome meals in small quantities and were forced to eat them. Meals were often served in buckets or bowls, and they ate like dogs because they were chained down. They were not allowed to bathe or clean up and had no access to good drinking water. Many slaves survived on the sea water offered to them while whites on the ships enjoyed safe drinking water provided before the trips. These poor conditions resulted in hunger, loss of weight and death. Surviving slaves were often too weak to walk and took some time to recover.